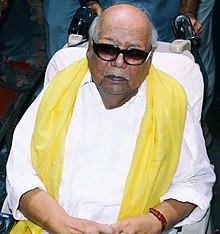 Chennai: Former Tamil Nadu Chief Minister and DMK President M. Karunanidhi, who was one of the two poles in the state and who was in public life for 80 long years, died on Tuesday evening after waging a grim battle for life in a city hospital, leaving a void in the Dravidian politics and triggering nationwide mourning for an essentially regional leader.

“With deep anguish, we announce the demise of our beloved Kalaignar M. Karunanidhi at 6.20 p.m.,” said a statement from Kauvery Hospital in the heart of Chennai where thousands of DMK cadres and fans have been camping for days hoping for a miraculous recovery.

“Despite the best possible efforts by a team of doctors and nurses to resuscitate him, he failed to respond. We profoundly mourned the loss of one of the tallest leaders of India and we share the grief of family members and fellow Tamilians worldwide.”

The news of the 94-year-old mass leader’s death cast a pall of gloom across the sprawling state which he had enticed all his political career through powerful oratory and script writing that changed the course of politics and the way Tamil cinema was made and helped the DMK’s growth. He was just 14 when be became a student activist.

Men and women, who had been praying for their leader’s recovery, wailed outside the hospital as news of his death broke. By then, Chennai was already tense, with residents stocking essentials like milk and vegetables anticipating a state-wide shutdown.

The mortal remains of the DMK President will be taken to his home in Gopalapuram here and then to Rajaji Hall for people to pay their last respects. The Tamil Nadu government announced a week-long mourning.

A DMK leader said Karunanidhi’s mortal remains will be laid to rest on Wednesday.

Prime Minister Narendra Modi, a host of Chief Ministers, Congress President Rahul Gandhi and several others from across the country are expected to fly to Chennai on Wednesday.

The DMK patriarch, who had faded from public life for nearly two years, had been in and out of hospital on account of age-related ailments. His admission to the Kauvery Hospital early on July 28 followed a sudden dip in blood pressure.

Occasionally, the hospital claimed improvement in his condition. But on Monday it said there has been a decline in his health and that maintaining his vital organ functions continued to remain a challenge. It also said that his response to medical interventions over the next 24 hours would determine the prognosis.

Even on Tuesday evening, the hospital came out with a bulletin saying there had been a significant decline in the condition of Karunanidhi “over the last few hours”. It said: “His condition is extremely critical and unstable.”

Even before the grim bulletins were issued, Karunanidhi’s family and the state appeared to be preparing for the inevitable.

Stalin accompanied by Alagiri and Kanimozhi and top leaders of the party met Chief Minister E. Palaniswami and pressed for Karunanidhi’s body to be interred on the Marina Beach near DMK stalwart C.N. Annadurai’s mausoleum. But the government declined the request.

Ahead of his death, the Tamil Nadu Police mobilized all its personnel across the state.

Karunanidhi, who only 10 days ago completed 49 years as DMK chief, led his party through various ups and downs against charismatic rivals M.G. Ramachandran, who had banished him to the opposition ranks till his own death in 1987, and J. Jayalalithaa, who died in 2016.

From 1967, when the DMK ousted the Congress for ever from power in the state, Tamil Nadu has been ruled either by the DMK or AIADMK.

Succeeding his mentor Annadurai in 1969 as Chief Minister, Karunanidhi maintained a strong hold over the party and government.

Though he didn’t aspire for politics beyond Tamil Nadu, the multi-faceted leader played key roles in national politics starting from when he aligned with Indira Gandhi in 1969 on issues like bank nationalisation and later in the formation of coalition governments under V.P. Singh, H.D. Deve Gowda, Atal Bihari Vajpayee and Manmohan Singh.

Once the ethnic conflict erupted in Sri Lanka in 1983, Karunanidhi became a champion of the Tamil cause and, later, the Tamil Tigers, often putting pressure on New Delhi to change its course vis-a-vis Colombo. But the LTTE’s assassination of former Prime Minister Rajiv Gandhi in 1991 almost wiped out the DMK, leaving him as the sole winner in Assembly elections.

It was one of the 13 Assembly elections he never lost and which helped him rule Tamil Nadu five times.

As Chief Minister, he had pioneered several welfare schemes and introduced freebies in the country’s politics. An avowed atheist, Karunanidhi was known for his trademark dark glasses as well as a yellow stole. The latter, critics felt, betrayed his hidden superstitious feelings.