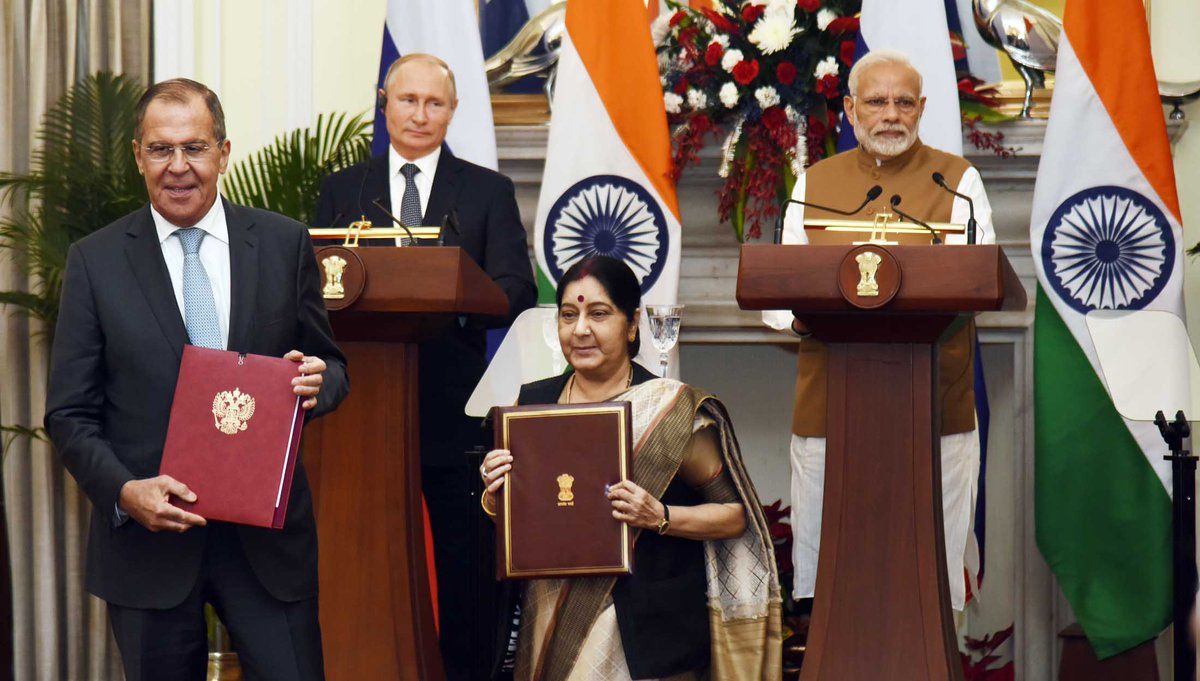 New Delhi: Brushing aside US threats of sanctions, India and Russia on Friday concluded a deal for supply of S-400 Triumf long-range surface-to-air missile system giving a substantial boost to air defence capabilities of the Indian Air Force.

The $5.4 billion (around Rs 40,000 crore) deal was concluded during the 19th India-Russia Annual Bilateral Summit between Prime Minister Narendra Modi and Russian President Vladimir Putin, though both the leaders made no mention of it in their statement to the media, apparently in view of the sensitivities involving the United States that has been pressing India not to go ahead with the deal.

Nor was the missile contract part of the signing ceremony for eight deals inked by the two sides in the presence of the two leaders covering areas of space cooperation, railways, nuclear cooperation, fertilisers and micro, small and medium enterprises (MSME).

An indication of the missile deal being concluded came in the joint statement issued by the two sides shortly after the talks between the leaders.

“The (two) sides welcomed the conclusion of the contract for the supply of the S-400 long-range surface-to-air missile system to India,” said the joint statement.

The S-400 missile deal has been an issue of much speculation after the Trump administration’s law — Countering America’s Adversaries Through Sanctions Act (CAATSA) — came into effect in January aimed at countries doing business with Russian, Iranian and North Korean defence companies. Washington has so far declined to make any exception to India by way of a waiver.

In his address to the media, Modi said that India-Russia relations are unique and that President Putin has personally contributed to it.

He said both the countries have agreed to work for a multipolar and multilateral world and work together in Afghanistan, the Indo-Pacific region and forums such as Shanghai Cooperation Organisation (SCO), BRICS, G20, and the Association of Southeast Asian Nations (ASEAN) besides cooperating in the fight against terrorism.

He said Friday’s summit will give a new direction to the Special and Privileged Strategic Partnership that India and Russia share and that the decisions taken today would increase bilateral cooperation, contributing to stability and peace in the world.

On his part, Putin said the two countries have been long connected through a strong relationship of friendship. He said both sides discussed topics of international and regional agenda.

The Russian President said India always gave priority to the relations with Russia which has always been part of India’s growth story.

“It is my great pleasure once again to invite Prime Minister Modi to participate in the next Vladivostok Forum as the main guest in September 2019,” he said.

The joint statement reaffirmed the commitment to enhance military technical cooperation between India and Russia, which has a long history of mutual trust and benefit.

“Both sides expressed satisfaction at the significant progress made on the ongoing project of the military technical cooperation and recognised the positive shift towards joint research and joint production of military technical equipments between the two countries.

“They highly evaluated the military industrial conference process as an important mechanism to promote the ‘Make in India’ policy of India,” the statement said.

The two sides called upon all states to work towards lessening global tensions and promoting the ideals of tolerance, cooperation, transparency and openness in inter-state relations.

They stressed that the primary challenge in large parts of the world remains ensuring rapid and environmentally sustainable economic development, removal of poverty, reducing inequality among and within states and providing basic health care. India and Russia pledged to cooperate with each other to achieve these goals, the statement said.

The two leaders reviewed the progress on the achievement of the goal to increase two-way investment to USD 30 billion by the year 2025 and noted with satisfaction that both countries were on the way to achieving this target.

They noted that in 2017 bilateral trade increased by more than 20 per cent and agreed to work towards its further increase and diversification.

“The two sides expressed their support to promoting bilateral trade in national currencies,” it said.

On civil nuclear cooperation, the two sides noted the progress achieved in the construction of the remainder of the six power units at Kudankulam NPP as well as the efforts being made in the components manufacturing for localization. They welcomed consultations on the new Russian designed NPP in India, as well as on the NPP equipment joint manufacturing of nuclear equipment cooperation in third countries.