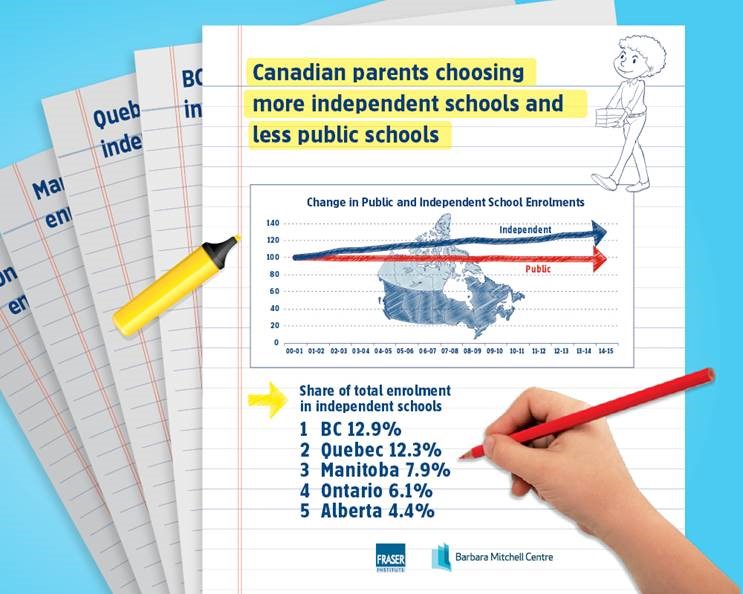 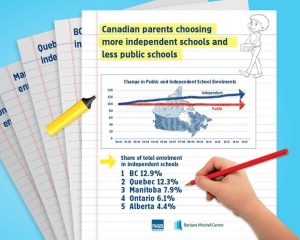 Vancouver: The share of K-12 students enrolled at independent schools across Canada increased 30.6 per cent over a 15-year period while public school enrolment declined, according to a new study released today by the Fraser Institute, an independent, non-partisan Canadian public policy think-tank.

“For their children’s education, parents across Canada are increasingly choosing options outside the public school system,” said Angela MacLeod, a policy analyst with the Fraser Institute’s Barbara Mitchell Centre for Improvement in Education and co-author of Where Our Students are Educated: Measuring Student Enrolment in Canada, 2017.

The study finds that, as a share of all K-12 students, enrolment increased at independent schools in all provinces and decreased for public schools everywhere from 2000/01 to 2014/15, the most recent year of available comparable data.

At the same time, the number of students enrolled in public schools declined by nearly 400,000 students.

Across Canada, the share of students enrolled in independent schools in 2014/15 ranged from 12.9 per cent in B.C. to 0.8 per cent in New Brunswick.

Five provinces—B.C., Alberta, Saskatchewan, Manitoba and Quebec—partially fund the operating costs of independent schools while the other provinces offer no financial support.

“While education is funded and delivered differently across the provinces, the evidence is clear—Canadian parents are increasingly looking to independent schools for more choice in how their children are educated,” MacLeod said.