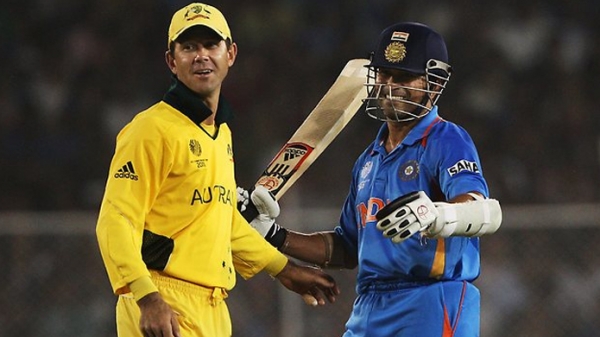 Canberra, Jan 20 (IANS) India suffered an astonishing batting collapse to snatch defeat from the jaws of victory as Australia bounced back from a difficult situation to win the fourth One Day International (ODI) by 25 runs at the Manuka Oval here on Wednesday.

Set a formidable target of 349 runs, India folded up for 323 despite centuries from Shikhar Dhawan (126) and Virat Kohli (106). The visitors were seemingly coasting to victory with the score reading 277/1 in the 38th over. But Dhawan’s dismissal triggered a collapse and the visiting team lost nine wickets for 46 runs to be all out in 49.2 overs.

Australia now lead the series 4-0. The fifth and last ODI will be played in Sydney on Saturday.

Australia have now won 19 games on the trot. This is the longest winning streak at home by any team since the formidable West Indies registered 18 consecutive victories in the 1980s. Kohli also created a bit of history for the visitors, becoming the fastest batsman to hit 25 ODI centuries, displacing Sachin Tendulkar from the top of the pile. The 27-year-old has taken 162 innings to complete the feat, while Sachin needed 234.

Pacer Kane Richardson played a crucial role in Australia’s victory with a five-wicket haul, including four in his last four overs. Fellow pacers John Hastings (2/50) and Mitchell Marsh (2/55) claimed two wickets each while off-spinner Nathan Lyon (1/76) copped a bit of punishment before bagging the wicket of rookie Gurkeerat Singh Mann.

The Indians were off to a flying start with the in-form Rohit Sharma going after the Australian bowling. Rohit has been in superb form in this series and was on song here as well, plundering 41 runs off 25 balls with two boundaries and three sixes. But the Mumbai right-hander virtually gifted away his wicket, while attempting to play a Richardson delivery which was going down the legside. Australian wicketkeeper Matthew Wade produced a superb diving effort to give the hosts the breakthrough.

But the Indians asserted their domination after that as Dhawan and Kohli stitched together a mammoth 212-run partnership. The two Delhi batsmen laid the foundation for an Indian victory before Dhawan was finally undone by a change of pace by Hastings. The left-hander tried to cut a shoulder-high delivery but was fooled by the slower pace and could only find George Bailey at backward point. India captain Mahendra Singh Dhoni (0) lasted all of three balls before edging one to Wade in the last ball of the over.

Kohli was next to go, coming down the track to hit Richardson to Australia skipper Steven Smith at mid-off. The visitors continued to lose wickets at regular intervals after that. Although Ravindra Jadeja (24) tried to turn the tide with a brave effort, it did not prove to be enough.

Earlier, riding on a powerful batting performance, including a century from opener Aaron Finch, Australia posted a formidable total of 348/8. Finch scored a run-a-ball 107 and posted an opening partnership of 187 runs with David Warner (93) to lay the foundation for a big total.

Smith (51) also made a useful contribution in the middle order before Glenn Maxwell (41) came up with the fireworks towards the end to give the Australian innings a superb finish.

Pacers Ishant Sharma (4/77) and Umesh Yadav (3/67) came up with a flurry of late wickets to keep the Australian total below the 350-run mark.

Electing to bat after winning the toss, Smith saw his decision vindicated as openers Finch and Warner tormented the Indian bowling.

Warner, who replaced Shaun Marsh in the Australian XI after returning from paternity leave, was the more aggressive among the Australian openers. The left-hander smashed 12 boundaries and a six during his 92-ball knock.

Finch gave Warner good support from the other end as the hosts kept the scoreboard ticking at a healthy rate, helped by some inconsistent fielding by the visitors.

The Australian blitzkrieg claimed a victim in umpire Richard Kettleborough when the Englishman was hit on the right leg by a Finch straight drive in the 17th over. Kettleborough limped off the field and was replaced by Australian official Paul Wilson.

Warner was looking well set for a well deserved century before being bowled while trying to hoist a slowish, incoming delivery from Ishant over mid-wicket.

Finch was dismissed by Yadav soon after completing his century when he mistimed an attempted pull shot. The ball found the upper edge of the bat and went up in the air as Ishant pulled off a comfortable catch.

But Indian hopes of containing the Australians to a manageable total soon disappeared as Smith and Maxwell smashed the bowlers all around the ground. Smith hit four boundaries and three sixes in a 29-ball 51 and Warner had six boundaries and a six in his 20-ball innings.

The Indian bowlers hit back late in the innings, claiming five wickets in the last six overs. But by then, the Australians had already set themselves up for a formidable total.