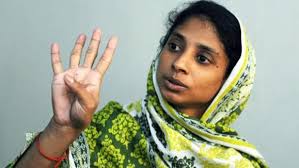 New Delhi/Islamabad, Aug 4 (IANS) “We will bring Geeta back to India,” External Affairs Minister Sushma Swaraj said on Tuesday evening after the Indian envoy in Pakistan met the hearing and speech-impaired Indian woman in Karachi.
Indian High Commissioner T.C.A. Raghavan met Geeta at the Edhi Foundation in Karachi where the young woman has been staying for the past 15 years after she accidentally strayed into Pakistani territory.
Sushma Swaraj, who had requested the envoy to go to Karachi to meet Geeta, tweeted: “Indian High Commissioner in Pakistan Mr Raghavan and Mrs Raghavan met Geeta in Karachi today.”
“We will bring Geeta back to India,” she said, adding: “This requires some formalities which we will complete.”
Sushma Swaraj tweeted thanks to those in Pakistan who helped look after the young woman.
“We are grateful to all individuals and institutions in Pakistan who looked after Geeta.”
She further said: “Our High Commissioner believes that Geeta is an Indian.”
Raghavan, addressing the press after meeting Geeta at the Edhi Foundation, said: “We will try to quickly find her family.”
He also added that despite ups and downs in ties, both countries were close neighbours and both have to undertake such humane responsibilities.
The envoy referred to the air force of both countries rescuing people from strife-torn Yemen.
He said when Prime Minister Narendra Modi met Prime Minister Nawaz Sharif in Ufa, Russia, last month “both gave importance to releasing of fishermen. This establishes that humanitarian issues are very important to both countries”.
Raghavan arrived at the Edhi Foundation along with his wife Ranjana.
Leading Pakistani human rights activist Ansar Burney, who has been closely pursuing Geeta’s case, thanked the Indian high commissioner for meeting Geeta.
Burney tweeted: “Dear Dr TCA Raghavan thanks for coming to Karachi and to meet Geeta alias Guddy @SushmaSwaraj @MEAIndia.”
On Monday, Sushma Swaraj said she asked Raghavan to pursue the case of Geeta, who in 2003 — then 11 years old — was spotted by the Pakistan Rangers in Lahore after she strayed across the border.
In a post on Twitter on Monday, Sushma Swaraj said: “I have asked Indian High Commissioner to Pakistan Dr TCA Raghavan to go to Karachi with Mrs Raghavan and meet this girl.”
The girl was handed over to the Edhi Foundation, a social welfare organisation in Pakistan.
Burney also called upon Bollywood star Salman Khan to help in locating the woman’s parents in India and replicate his “Bajrangi Bhaijaan” role in real life.
“We must not leave any stone unturned to make Geeta realise there are sympathisers in India too, who are making efforts to help her reach home,” he said.
The director of “Bajrangi Bhaijaan”, Kabir Khan, in a mail to Burney said he would try to help in whatever way he can.
Burney had travelled to India in October 2012 with photographs of the woman but was unable to make progress.
Bilquis Edhi, who runs the Edhi Foundation, named her Geeta.
In a tweet, Burney on Monday said “Geeta alias Guddy may be from Jharkhand or Telangana in India. Geeta remember no 193 and says she has seven brothers & four sisters.”
According to tweets by a Pakistani activist, Geeta is a vegetarian and has set up a small ‘mandir’ in her room at the Edhi Foundation where she prays to Indian gods and goddesses. She also observers fast during Ramadan.
Yusra Askari tweeted: “Know Geeta better: She’s a vegetarian. Fasts in Ramzan. Has her own mandir. Maintains a diary. Loves to dance.”