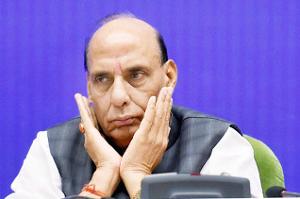 New Delhi, April 9 (IANS) Home Minister Rajnath Singh and his deputy Kiren Rijiju got stuck inside a lift at the CRPF headquarters here on Thursday and had to be hoisted out through its roof, an official said.
The incident took place at the Central Reserve Police Force (CRPF) headquarters in south Delhi’s Vasant Kunj where the home minister had gone to celebrate “Shaurya Diwas”.
Minister of State for Home Affairs Rijiju and CRPF Director General Prakash Mishra were also stuck along with him.
“The lift got stuck due to a technical fault. We managed to take the ministers and our chief out from the lift within a few minutes. They were hoisted up through the roof,” said a CRPF official.
He said they had pressed the alarm when the lift refused to budge.
“We gave them a chair to stand, and they were pulled out by their hands one by one,” the official said.
The home minister was the last to be hauled up through the roof, after the CRPF chief and Rijiju.
“The home minister told the officers to pull him out last. First, he asked them to take out the CRPF chief and then the minister of state,” the official added.
The home minister himself shared the incident with reporters.