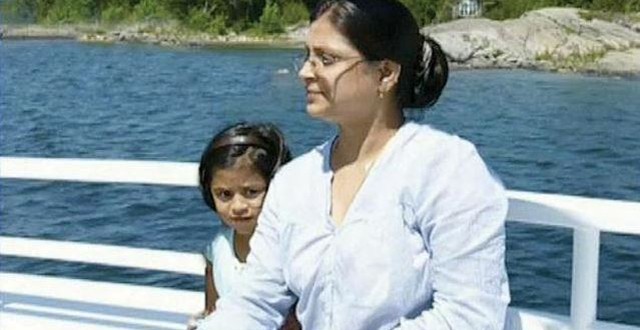 Toronto, Aug 4 (IANS) A 37-year-old Indo-Canadian woman has been sentenced to 10 years in jail for beating her three-year-old daughter to death.
Nandini Jha, convicted for second-degree murder of toddler Niyati Jha, faces deportation to India after serving the jail term because she is a permanent citizen and does not have Canadian citizenship yet.
Niyati was just two days short of her fourth birthday when she died on September 21, 2011 from severe injuries.
During the trial, the jury heard that the little girl was first brought to a clinic near her home in Mississauga.
Her body had massive bruises on neck, forearm, thighs, chest, temple and ears, a fractured rib, spinal injuries and multiple skull fractures.
Multiple skull fractures caused Niyati’s brain to swell to the size of a football, forcing brain tissue to come out of her left ear.
Shocked by the extent of injuries, the staff at the clinic called police and paramedics who rushed the girl to Mississauga Hospital.
But her condition deteriorated and Niyati was rushed to the Hospital for Sick Children in Toronto.
She was put on the life support system and declared brain dead the next day.
The mother told the doctors that her daughter had injured herself when a bookshelf fell on her three weeks ago.
However, during the search of Jha’s home, forensic teams found the little girl’s blood on walls, on her clothes and in the laundry room.
During her testimony, Nandini pleaded not guilty and her husband Sarojan Jha said he had no knowledge of his daughter’s treatment as he worked for long hours as a computer programmer.
The horrible treatment of Niyati before her death moved judge Deena Baltman so much that she broke down while sentencing the mother to 10 years’ term.
“It is very difficult to understand this crime. She (Nandini) beat her repeatedly, ultimately to death,” the judge said.
The judge did not accept Nandini’s version that her daughter was injured when a bookcase fell on her. “The falling bookcase was a fiction she (the mother) created.”
The Jha family came to Canada in 2010 with their two children. Nandini reportedly did not like coming to Canada and found it difficult to adjust.
The couple have had two more children since Niyati’s death.