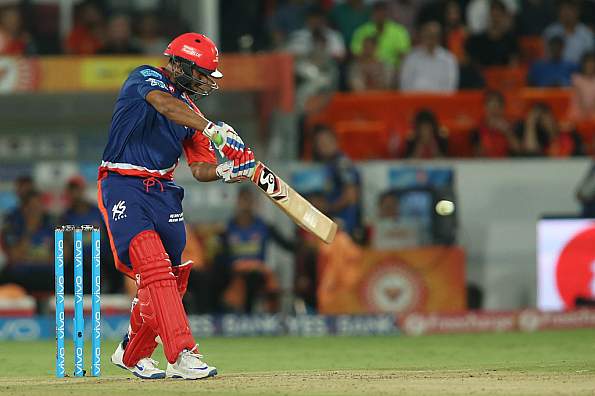 Chasing a target of 147 runs, Delhi did not face too much difficulties from the Hyderabad bowlers before romping home with 11 balls to spare.

Despite the loss, Hyderabad continue to sit at the top of the IPL table with 14 points from 11 matches. They have the same number of points as second placed Gujarat Lions but are ahead due to a superior run rate.

The hosts will however be disappointed with the fact that they have suffered a heavy defeat in their last home game of the ongoing season. They now face three away matches on the trot.

Delhi on the other hand, climbed to the third spot with 12 points from 10 matches.

The visitors were off to a poor start with opener Mayank Aggarwal departing early. But Quinton de Kock and Karun Nair (20) put together a 55-run partnership off 37 balls to build the foundation of a successful run chase.

Pacer Moises Henriques gave the noisy home crowd a glimmer of hope by removing both Nair and de Kock in the 10th over.

The Australian got Nair with a beautiful yorker but was a bit lucky to get de Kock’s wicket. The South African star had attempted an upper cut to a short pitched delivery which was sailing over his head on the way to the wicketkeeper.

The umpire decided to award a caught behind decision, but television replays later showed that the bat did not connect with the ball. De Kock scored 44 runs off 31 balls with five boundaries and two sixes.

But Delhi faced no trouble from thereon as Rishabh Pant and Sanju Samson took them to victory. Pant was unbeaten on 39 runs off 6 deliveries with two boundaries and three well-struck sixes. Samson remained unbeaten on 34 runs, hitting a couple of sixes during his 26-ball stay in the middle.

For Hyderabad, Henriques was the best bowler with figures of 2/19 in three overs while veteran pacer Ashish Nehra (1/23) was the only other bowler to get a wicket.

Earlier, Sunrisers Hyderabad squandered a brilliant start to finish at 146/8 against a disciplined Delhi Daredevils bowling.

The hosts were once again off to a brilliant start as the opening duo of David Warner (46) and Shikhar Dhawan (34) fired 51 runs in the powerplay to lay the platform but lost the momentum as the Delhi bowlers bounced back with some brilliant efforts.

Warner, who has been in prolific form this season, looked set for another big score but off-spinner Jayant Yadav foxed him with a slower one to dismiss him four short of his sixth half-century. The Australian smashed six boundaries and a six to add 67 with Dhawan.

Next in, New Zealand skipper Kane Williamson (27) joined Dhawan but the duo could add only 31 runs as leg-spinner Amit Mishra sent the southpaw packing with Sanju Samson latching on to a brilliant running catch at deep midwicket. Dhawan’s 37-ball knock was laced with three hits to the fence.

Mishra struck again in his very next overA to remove incoming batsman Yuvraj Singh (8) and then Shami, who leaked 22 off his first two overs, packed Moises Henriques off the first delivery of his third over to reduce the hosts to 114/ 4.

Young Deepak Hooda (10) then added 21 runs for the fifth wicket with Williamson, only to be foolishly dismissed hit wicket from a slower delivery off Nathan Coulter-Nile.

Williamson soon joined Hooda at the dug-out after being cleaned up by Chris Morris. In his attempt to accelerate the scoring, the Kiwi tried to flash a fast yorker length ball only to find his bails in the air. His 24-ball knock included three boundaries.

Morris then ran out Bhuvneshwar Kumar (1) in his own follow through as wicketkeeper-batsman Naman Ojha (7), Barinder Sran (1) and Ashish Nehra (1) could only add seven runs in the last over.

For the visitors, Mishra and Coulter-Nile picked two wickets while Yadav, Shami and Morris chipped in with one wicket apiece.