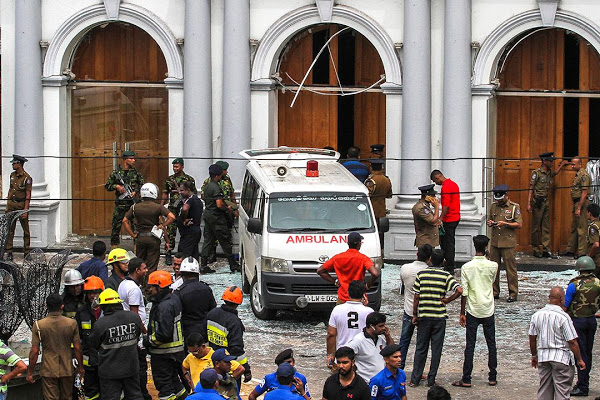 Colombo: The Islamic State on Tuesday claimed responsibility for the horrific Easter Sunday suicide bombings in Sri Lanka as the death toll in the carnage climbed to 321, including 10 Indians, with Prime Minister Ranil Wickremesinghe warning of more explosives and militants “out there” and that the Indian Embassy was also a “possible target”.

The Islamic State’s claim came as Sri Lankans started to bury the dead from the string of bombings. Tuesday was declared a national day of mourning and white flags were hung from buildings across Colombo as a three-minute silence was held from 8.30 a.m, about the time of the first of Sunday’s bombings.

At St. Sebastian’s in Negombo, around 40 km north of Colombo, more than 20 coffins were brought in for individual services in the run-up to a mass memorial. A few hundred metres away, a palm-lined lot donated to the church was turned into a mass burial site, where 22 bodies were laid to rest.

An Arabic language statement on the Islamic State group’s official al-Amaq news agency made the claim on an encrypted messaging app, saying the suicide bombers were “fighters of the Islamic State”.

“The perpetrators of the attack that targeted nationals of the crusader alliance (anti-IS US-led coalition) and Christians in Sri Lanka were Islamic State fighters,” the brief message said.

Tuesday’s statement came after an unconfirmed video posted to social media by an affiliated group suggested that the Islamic State was behind the Easter horror. That video showed photos of three of the alleged suicide bombers.

The men, who are described as “assailants” rather than the more common “martyrs”, were named as Abul Barra, Abul Mukhtar and Abu Ubaida and featured in front of a black IS flag giving the one-finger salute, the news.com of Australia said.

Wickremesinghe on Tuesday warned that there were more explosives and militants “out there”. He also acknowledged there was a prior warning of the attacks and said some officials would likely lose their jobs over intelligence lapses.

He also said there was a fourth failed attack on another major hotel and that the Indian Embassy was also a “possible target”.

Sri Lankan authorities were making progress in identifying the culprits and evidence had been found on foreign links of the attacks, he added.

About the Islamic State’s claim, the Prime Minister said: “We will be following up on IS claims. We believe there may be links.”

Earlier in the day, Defence Minister Ruwan Wijewardene said that Easter attacks were a “retaliation” for last month’s Christchurch mosque shootings that left 50 Muslims dead and were blamed on a white supermacist from Australia

Authorities have so far named a Sri Lankan Muslim group, the National Thowheed Jamath (NJT), for the Sunday bombings which left over 500 injured.

The Islamic State’s and the Defence Minister’s claim give an international dimension to the Sunday carnage that killed mostly Sri Lankans but also some 40 foreigners, including from the US and other Western countries as well as 10 Indians.

The Indian High Commission said that with the death of two more Indians, the Indian death toll had risen to 10.

Earlier on Tuesday, bomb disposal squads were called to Kollupitiya railway station in Colombo after an unattended package was found on a train. A state of emergency has been introduced and 40 arrests made, with the second overnight curfew lifted at 4 a.m.

A Syrian was among those arrested and a massive search operation was ongoing to nab more suspects. The government has suggested that seven suicide bombers were involved in the bombings.

A footage has also emerged of a suspected suicide bomber wearing a sky blue shirt and jeans and carrying a backpack, casually walking into an Easter congregation at St Sebastian’s church in Negombo where he blew himself up.

The series of attacks on Sunday began with six nearly simultaneous explosions targeting three luxury hotels in Colombo and three churches – one in Colombo, another in Negombo and the third in the Tamil-majority Batticaloa town in the island’s east.

The last of the bombings occurred when police raided a residential complex in Dematagoda, a neighbourhood in Colombo, but a terrorist detonated himself killing three policemen and also the wife and sister of one of the suicide bombers.

Sunday was the deadliest day in the country since the end of a civil war between Tamil Tigers and government forces that began in 1983 and ended in 2009.

The police in Colombo issued an alert that a van or truck carrying explosives may be in Colombo following which security was stepped up at government buildings and police stations.