But all is not well in the Industry

Summer has arrived and the blueberry bushes are heavy with berries. The pickers are in the fields, but there aren’t enough of them.  The berries are plentiful but the prices are so low many farmers struggle to keep the farms afloat. Some producers feel that the time has come for a review of how the industry functions.  In many cases the farms are family businesses that fit with the Punjabi sense that they are farmers, “the land is in their blood.” As producer, Gurdial S. Dale Badh says, the farm is the family unit and business, and is a way of life that makes this a viable undertaking as well as a sustaining the desire and ability for these families to live together.

The industry is caught between the pressures of land costs in the Lower Mainland, issues around the size of some family residences on the “home plate” and conflicts with some municipal bylaws.  There is an issue with the availability of, and cost of, labour to harvest the crops, and the serious issue of how much it costs to operate a farm and what you do when the price per pound for the product won’t cover the expenses.

Gurdial S. Dale Badh is a successful realtor in the lower mainland. He’s also a member of a blueberry family that includes his brother Sukhi, who is also the General Manager of Pulse FM, and his father Ajit Singh Badh. Together they operate BBC Farms. Badh says that the industry is poor at present.

“When we got into it twenty years ago, the prices were good,” said Badh. “we were getting about $2.25 a pound so it was worthwhile doing it. Last year we were getting around $1/pound and in the store the consumer is paying $3/pound. You look at the margin and by the time we pay the pickers, our chemical costs, our fertilizers, our pruning, our labour costs and I’m not taking in to consideration our financial costs.” 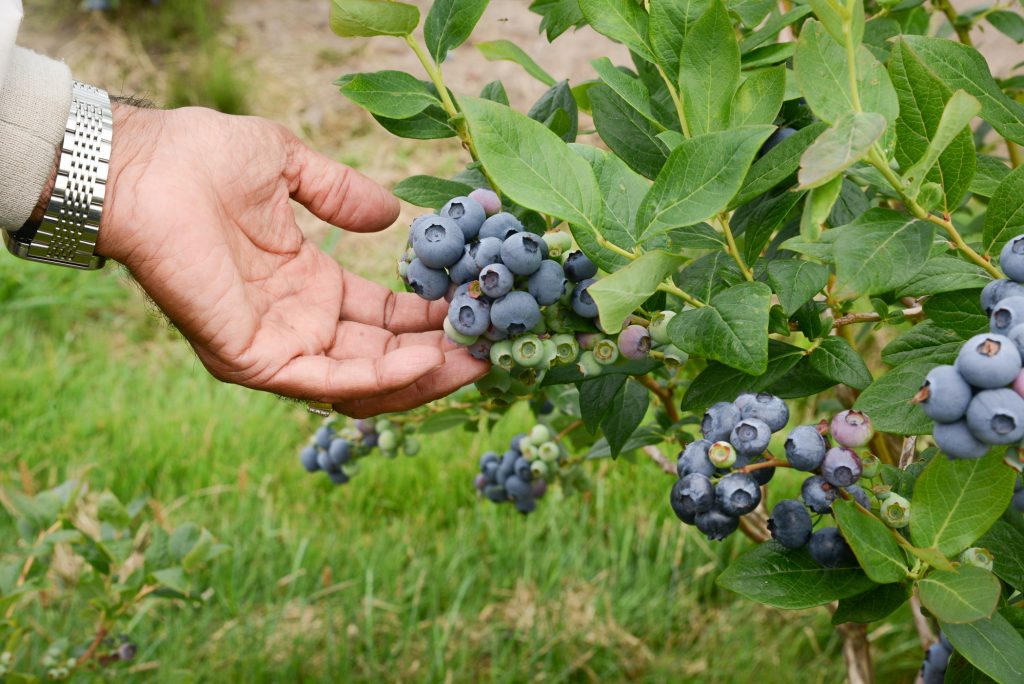 “On the Economics of the business,” said Sukhi Badh,  “I can tell you this year, the price is going to vary from 90 cents hand-picked, to $1.10 – $1.20 a pound. If we’re lucky it’ll start at $1.40 – $1.50, and if you’re going to us labour contractors, you’re going to pay them 65 cents per poun. That leaves you 35 – 40 cents a pound. And that money will also have to pay your mortgage costs, chemical costs, pesticide costs, the cost of your irrigation system, and financially is it really worth it? Probably not, but I think most of the farmers are looking at capital gains down the road and the lifestyle they should have.

Badh says that the industry does not provide the returns to allow him to feed his family after mortgage and operating payments.

“We’re surviving because I have outside income,” said Badh. “That’s what a lot of the Punjabi families are doing. The farm is not their primary income source. They’re working outside the farms and supporting the operation. A lot of the time politicians say they want to preserve farmland.  Well, do something about it.  Step forward and help these farmers.”

Over the next few weeks the Asian Journal will look at an industry through the eyes of some long time producers, who considered the business so lucrative at one time, that everyone got into it without noticing the storm clouds gathering on the horizon that could drive many of the smaller family farms out of the business.