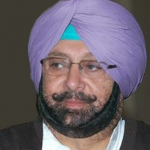 CHANDIGARH: Congress Deputy Leader in the Lok Sabha Capt Amarinder Singh today said that Jagmeet Brar had proved to be most ungrateful person and it was a classic case of grapes being sour for him.

“Nevertheless it is a good riddance”, he remarked while adding, “party will be better off without such leaders who are always driven more by opportunism than by any commitment”.

Reacting to Brar’s charges, Capt Amarinder said, he (Brar) has always changed the parties for his personal interests with regular frequency. “This is not for the first time and this is not going to be the last time for him to change the party as he changes parties regularly according to their fortunes”, he said adding, the moment he feels BJP’s fortunes are down he would be the first to leave it.

Asserting that Brar was a classic chameleon character in politics, the former Chief Minister pointed out, he was the same person who had burnt the copies of the Constitution of India and tattooed ‘Khalistan Zindabad’ on his forearm which he later got removed by plastic surgery and that is the reason he always wears full sleeve shirts.

Regretting that Brar was being too ungrateful to the party which gave so much to him, Capt Amarinder revealed that it was the Congress president Ms Sonia Gandhi who took personal interest in his election when he won. He disclosed that Ms Gandhi had personally entrusted him with the responsibility of ensuring his victory in the elections. “And despite repeated defeats he was repeatedly given the opportunity to contest and also made special invitee to the Congress Working Committee, the highest decision making body of the party”, he pointed out, while asking, “what more did he expect from the party not to feel aggrieved”.