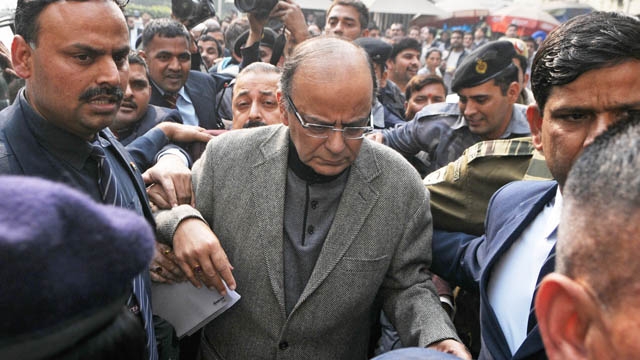 New Delhi, Jan 5 (IANS) Accusing Delhi Chief Minister Arvind Kejriwal of making false statements against him, Finance Minister Arun Jaitley on Tuesday recorded his statement in a court here in connection with a criminal defamation case he has filed.

Jaitley has filed a complaint against Kejriwal and five other Aam Aadmi Party (AAP) leaders.

Chief Metropolitan Magistrate Sanjay Khanagwal recorded the statement of Jaitley as the complainant witness in the case, who appeared before the court amidst tight security.

The proceeding was held in-camera for security reasons.

According to court sources, Jaitley told the court that Kejriwal and the five people had given “false” and “defamatory” statements against him, harming his reputation.

“The statements are made by accused with a malicious intention in order to lower my reputation among my friends, supporters and in eyes of the right thinking members of the public at large,” said Jaitley while recording his statement.

He said: “The statements were made with the intention to deflect attention from a CBI investigation against a particular civil servant who was working with Kejriwal, in relation to a complaint filed by a third party.”

“The six accused named in the complaint by me have between the period December 15 and December 20, 2015, made/published in close cooperation and co-ordination with each other and with a common intention and knowledge a series of statements which are ex facie false and defamatory and towards me and my members of my family,” said Jaitley.

He added since the accused are in public life and are educated journalist and others professional these statements are false to their knowledge.

“During my entire tenure I have not received directly or indirectly a single rupee from DDCA on any account whatsoever (sic.),” said Jaitley.

He told court that during his tenure as President, Delhi and District Cricket Association (DDCA), a cricket stadium was built at Ferozshah Kotla that was supervised by a committee formed by executive committee of association.

He was not a member of the committee charged with the construction and renovations of the stadium.

Jaitley added that “in the capacity of president of DDCA, I used to chair the board meetings where only the important decisions were put up for approval before the board”.

“The accounts of DDCA were always duly audited and were subsequently all approved by the annual general meeting of DDCA. These accounts were submitted before the taxation authorities and balance sheets along with the annual report were filed with the registrar of the companies,” said Jaitley.

“The false imputation made by accused persons in the tweets/statement and in the press conference and Facebook and Twitter posts individually and collectively that money has been siphoned out in the construction of the stadium and the innuendo that I am a beneficiary of the same is per se false and defamatory to the knowledge of all accused persons named by me in the complaint.”

He told court that statement made by accused that he and his family had a pecuniary interest in this company was per se false and defamatory.

The court also recorded the statement of chairman and editor-in-chief of India TV Rajat Sharma as complainant witness and posted the matter for February 3 for next hearing.

Jaitley, who headed the DDCA for 13 years till 2013, has been accused of corruption by Delhi’s ruling AAP. He has denied the allegations.

Kejriwal has demanded that Jaitley must resign from the government or be removed as finance minister to enable an independent probe into the DDCA affairs.