Asian Journal
Home Headlines Jas Dosanjh, honoured as one of the best officer in B.C. 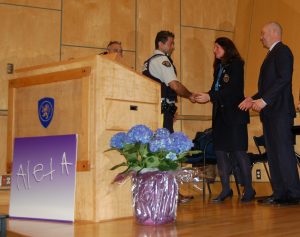 North Vancouver RCMP is proud to acknowledge traffic officer Cst. Jas Dosanjh as a repeat recipient of the Alexa’s Team award for 2017. Cst. Dosanjh conducted 128 investigations of impaired drivers qualifying him as the top cop in B.C. Four other North Vancouver officers also qualified for the yearly Alexa’s Team award. Nominations to receive the award require a minimum of 12 impaired driving investigations done in a year.

Since 2010, as a result of Cst. Dosanjh’s focus and commitment to investigations of impaired drivers, he has removed a total of 924 impaired drivers from the road, in either drug or alcohol driving offences.

‘Alexa’s Team’ honours the memory of Alexa Middelaer who was struck and killed by an impaired driver in 2008. Police officers are recognized as members of ‘Alexa’s Team’ for their work in getting impaired drivers off the road. The yearly awards are a joint project of Alexa’s parents, Laurel and Michael Middelaer, and the Justice Institute of British Columbia. This year the awards ceremony was held on Wednesday, April 12 at the Justice Institute.

The Alexa Award Program has created opportunities for increased awareness and pride in the difficult, and sometimes thankless, work involved in taking impaired drivers off the road, said Sgt. Bryce Petersen of the North Vancouver RCMP Traffic Unit. North Vancouver officers are committed to making our community and its roads safer. Taking impaired drivers off the road is a vital part of that work.