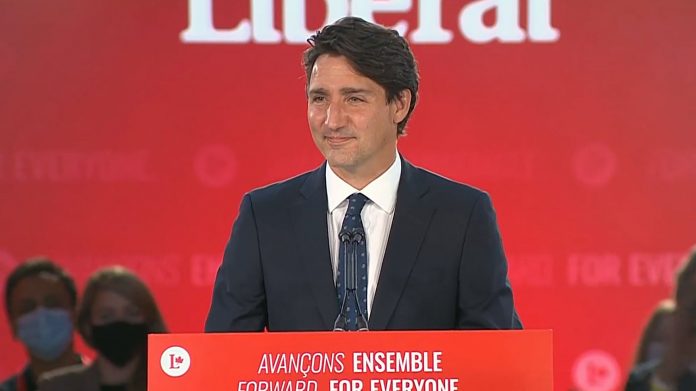 Ottawa: Canadians have chosen another minority Liberal government _ almost identical to the one it replaced _ to finish the fight against COVID-19 and rebuild the shattered economy.

Precisely how stable a minority remains to be seen, as results were still trickling in and there were tight contests in dozens of ridings as the clock ran out on Monday night.

There are also almost 800,000 mail-in ballots to be counted, starting Tuesday, which could yet change the preliminary results in many of those tightly contested seats.

Early Tuesday, Justin Trudeau’s Liberals were leading or elected in 158 seats _ just one more than they won in 2019 and a dozen short of the 170 needed for a majority in the House of Commons.

Erin O’Toole’s Conservatives were leading or elected in 121 seats, the same as 2019 even though they won slightly more of the popular vote than the Liberals, as they did last time.

Jagmeet Singh’s NDP were leading or elected in 26, a gain of two seats, while Yves-Francois Blanchet’s Bloc Quebecois was down one to 31.

The Greens, which elected three MPs in 2019, were down to two. Leader Annamie Paul, who had faced an internal insurrection last spring, was projected to come in a distant fourth place in Toronto Centre in her third try to wrest that seat from the Liberals.

Maxime Bernier’s People’s Party, which ran on an anti-public health restrictions platform, didn’t come close to winning a seat anywhere but pulled enough votes from the Conservatives to rob them of victory in a number of close races, particularly in Ontario.

The upshot raises questions about the judgment and strategy of both Trudeau and O’Toole.

Trudeau pulled the plug on his minority Liberal government on Aug. 15, a little less than two years after Canadians first reduced the Liberals to a minority.

He argued that Canada was at a pivotal moment in history and Canadians deserved a chance to decide how they wanted to proceed through the rest of the pandemic and beyond.

But the timing of his election call, coming as a fourth wave of the novel coronavirus was beginning to sweep the country, quickly sapped the goodwill Trudeau had built among Canadians for his government’s handling of the pandemic over the previous 18 months.