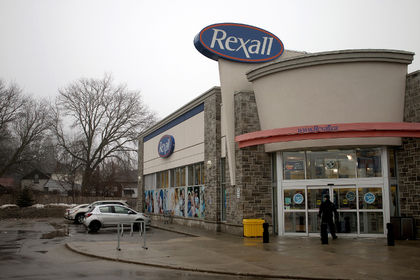 National drugstore chain Rexall Health is being sold to U.S. health care giant McKesson Corp. in a C$3-billion deal that one observer said was likely driven in part by the low Canadian dollar.

The sale by the Katz Group, which is still subject to regulatory approvals, includes 470 retail pharmacies, a group of family doctor clinics and ClaimSecure Inc., a healthcare management and technology firm.

This isn’t the first time McKesson has signed a deal with the Edmonton-based Katz Group. In 2012, the prescription drug distributor acquired Katz’s independent outlets and franchise businesses _ primarily operating as I.D.A and Guardian _ for about $920 million.

The two companies said Wednesday the deal was a “natural next step” in a business relationship that has spanned 20 years. It will also expand McKesson’s footprint in a country where there is a wealth of opportunity, said John Hammergren, chairman and CEO of the San Francisco-based firm.

“Canada’s healthcare environment is rapidly evolving; it is marked by a move of primary care into pharmacy and increasingly complex patient demand,” he said in a news release Wednesday.

“With today’s announcement, McKesson will bring together the strengths and expertise of our diverse portfolio to address challenges and opportunities in delivering the very best patient care.”

McKesson, the Katz Group and Rexall all declined interview requests.

“Canadian companies are going for a lot cheaper than they were even two years ago, which means that they have a greater chance in the return on investment by paying such a lower acquisition cost for the entity,” said Winder, a partner and founder of Retail Advisors Network.

“With the U.S. economy surely but slowly picking up, and the Canadian dollar being as weak as it is, everything is on sale in Canada.”

“They sort of showcased what they can do if given the right capital with some of their newer outlets,” he said.

“It appeared from the outside that it was an asset that was sort of undervalued and hadn’t yet quite hit its stride.”

With the backing of McKesson, Rexall has an opportunity to expand its renovations and open up more stores, said Winder.

Winder’s business partner, Tony Whitehouse, said Rexall could be seen as an attractive asset to some of Canada’s biggest grocery store chains in the future.

RBC analyst Irene Nattel said the Rexall deal, which will be funded by cash and debt, was not entirely a surprise.

Since McKesson was already acting as a supplier to Rexall, Nattel doesn’t believe the sale will have any “significant implications” to its competitors, Quebec-based pharmacy giant Jean Coutu (TSX:PJC.A) or Shoppers.

The founder and chairman of the Katz Group, Daryl Katz, said his company will continue to invest in its three other types of business _ real estate, sports and entertainment, and investments. The company owns the Edmonton Oilers and is helping develop a new hockey arena, Rogers Place, which is set to open this fall.