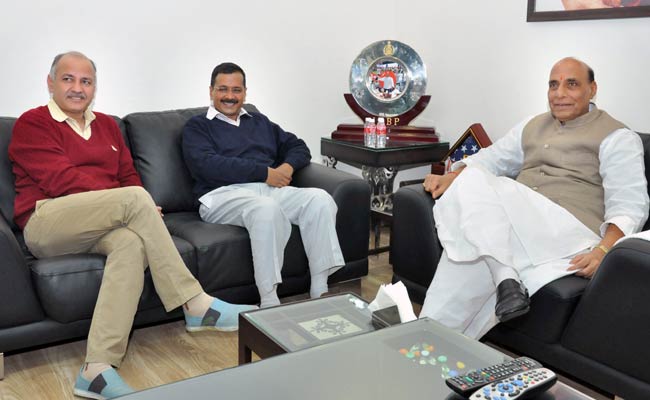 New Delhi, Feb 11 (IANS) A day after the AAP registered a historic victory in the Delhi assembly polls, chief minister-designate Arvind Kejriwal Wednesday sought the centre’s cooperation to ensure full statehood for the national capital.
Kejriwal, the Aam Aadmi Party’s (AAP) convenor, meanwhile, declined to take the Z security cover accorded to him, party sources told IANS after he called on Union Home Minister Rajnath Singh at his official residence.
Delhi’s full statehood was one of the major poll promises of the AAP.
“We asked them to support full statehood to Delhi. Both (AAP and BJP) the parties are in a majority and it is the best time to avail the opportunity of granting full statehood to Delhi,” AAP leader Manish Sisodia, who accompanied Kejriwal during the half-an-hour meet, told reporters.
He also said that the union minister assured the AAP of the central government’s “constructive cooperation” and that “the party line would not come in between working of the two governments”.
Earlier in the day, the AAP leaders called on union urban development minister M. Venkaiah Naidu at his office and discussed various issues concerning the national capital.
During this meeting, issues related to granting full statehood to Delhi and giving land from the Delhi Development Authority (DDA) for building schools, parking lots and play grounds were discussed.
The AAP leaders also discussed regularisation of the city’s unauthorised colonies.
At the meeting, Naidu emphasised the need for a pro-active role of the Delhi government in mobilising investments for housing including slum re-development, solid waste management and sanitation.
Naidu also said that prompt action needed to be taken to allot over 24,000 houses that were constructed under the Jawaharlal Nehru National Urban Renewal Mission.
Kejriwal also met Delhi’s Lt. Governor Najeeb Jung to apprise him that he had been elected the leader of the AAP’s legislature party.
Kejriwal, to be sworn-in as Delhi’s chief minister Saturday at the Ramlila Ground for a second time, also met President Pranab Mukherjee at Rashtrapati Bhavan in the evening.
President Mukherjee gifted Kejriwal a copy of the Constitution of India and a book penned by him.