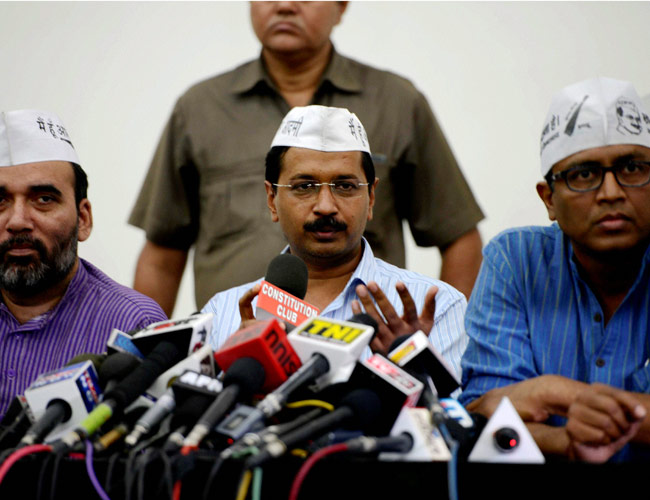 Three of the others were ministers in the 49-day-old Arvind Kejriwal government: Satyendra Jain (health), Saurabh Bhardawaj (transport) and Girish Soni (labour). While 12 of the 28 candidates who won in December 2013 have been fielded in their constituencies, the other 10 had finished a close second, said a party leader.

Bharti, who will again contest from Malviya Nagar in south Delhi, got into a huge row after he landed up at the house of some Africans in his area who were accused by locals of indulging in flesh trade.

A police case was filed against Bharti but AAP leader Arvind Kejriwal stood by him saying the minister had done no wrong.

The names of Kejriwal, his confidant Manish Sisodia, who too was a minister in the AAP government, and former social welfare minister Rakhi Birla do not figure in the first list.

An AAP leader told IANS that the party wanted to get busy with its election campaign ahead of others — a la 2013 when it put up a stunning show by winning 28 of the 70 seats in Delhi.

“Like in 2013, we want our candidates to focus on their constituencies,” the source said.

The AAP had been repeatedly demanding fresh elections in Delhi ever since the capital was put under President’s Rule in February after Kejriwal quit over his government’s failure to pass the Jan Lokpal bill.

After the December 2013 elections threw up a hung house, the Bharatiya Janata Party failed to form a government despite winning 31 seats and with one seat held by its ally Akali Dal.

The AAP formed a minority government with the backing of the eight-member Congress party.

The BJP won all seven Lok Sabha seats in Delhi in May this year while the AAP stood second. The Congress was mauled and finished third in six places and fourth in the seventh.

Kejriwal and the AAP have already plunged into election campaign and have expressed confidence that they will be able to overcome the BJP challenge. The BJP is equally confident of defeating the AAP.