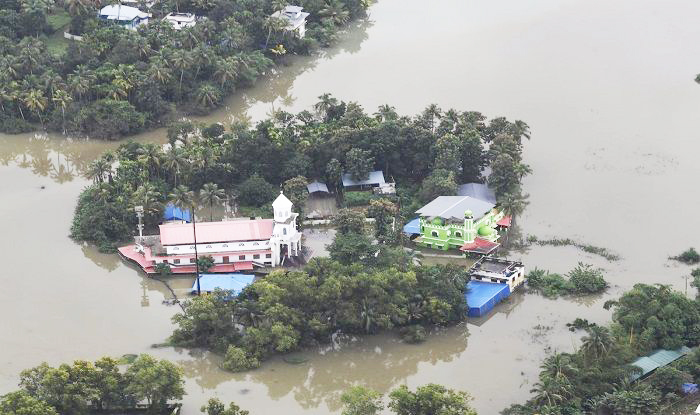 Vijayan told the media that the deaths began since the monsoon rains started on May 29 but 265 of the casualties were reported from August 8 when torrential downpour triggered the worst flooding in the state in nearly a century.

Another 36 people were missing, he said, and urged those battered by the floods to submit on the Kerala government website details of the losses suffered by them.

Some 7,000 houses were destroyed in the fury and around 50,000 had been partially damaged.

Vijayan’s comments came as more and more people began quitting the relief camps, which at one time totalled more than 3,000, to restart lives in their previously water-logged homes.

As Friday remained sunny, water receded faster in most places that were inundated.

The maximum number of people in relief camps were said to be in Alappuzha, Chengannur, Paravur, Changnacherry, Chalakudy and parts of Pathanamthitta district.

In Kottayam, several camps wound up. At one centre at the CMS College, people were treated to an Onam ‘sadya’ — the traditional feast served during Kerala’s most important festival.

The main Onam festival falls on Saturday but Kerala will at best see subdued celebrations. The government has cancelled the official festivities and diverted the Rs 39 crore meant for it for relief work.

“We were treated well by the camp managers. We do not know what our fate will be when we return as we have nothing except the clothes we are in,” said Thankama, a 70-year-old woman as she prepared to leave.

Finance Minister Thomas Issac said that around 5,000 volunteers were reaching the water-logged areas in and around Kuttandu.

“An army of electricians, plumbers and even snake catchers are going to go around the 13 panchayats in Alappuzha district from August 28. They will clean up all houses and latest by the first week of next month all those in relief camps will be brought home,” he said.

Hectic work was on to get the damaged Alappuzha-Changnacherry road to make it motorable again.

To raise additional funds for the Chief Minister’s Distress Relief Fund, Issac announced a special lottery whose tickets would cost Rs 250 each. The government hopes to raise Rs 100 crore from the lottery.

Thiruvananthapuram district Panchayat President V.K. Madhu said that 4,000 people from the capital district would spread over across various flood ravaged places to engage in cleaning exercises starting on Saturday.

In Chengannur, many homes was spruced up.

“My daughter’s marriage was fixed for the first week of next month. Now we have to start all over again as we have decided to postpone it,” said a distraught father near Chengannur.

Some voluntary agencies have begun counselling sessions in the relief camps.

On Friday, two government officials were arrested in Wayanad for embezzling relief materials. Another person was similarly caught in Chengannur.

A person engaged in relief work told IANS that in several camps some political parties were diverting the relief materials to areas of their interest.

Congress leader Ramesh Chennithala demanded that the government should hike the amount of money being given to each camp inmate from Rs 10,000 to 25,000.