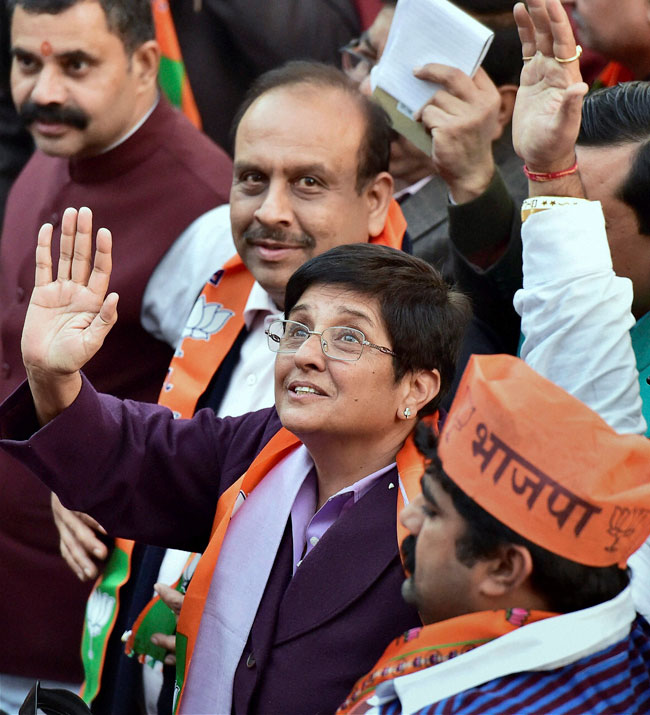 New Delhi: Former IPS officer Kiran Bedi, who had joined the BJP less than a week back, will be the party’s chief ministerial candidate in the Feb 7 Delhi assembly elections, taking on her former anti-corruption stir colleague Arvind Kejriwal of the AAP.
She will contest from Krishna Nagar seat in east Delhi. It was earlier held by Harsh Vardhan, the chief ministerial candidate in the December 2013 elections and now a union minister
Making the announcement after the meeting of party parliamentary board, Bharatiya Janata Party (BJP) chief Amit Shah expressed confidence that the decision will result in the party getting full majority.
“BJP parliamentary board has decided that the party will fight the forthcoming polls under leadership of Kiran Bedi. Kiranji will also be the chief ministerial candidate,” Shah said at a late night press conference.
“I feel the name that the BJP has decided will meet the peoples’ expectations and our decision will definitely lead to victory,” he added.
Shah said that workers were feeling enthused since Bedi took membership of the party.
“It has raised their morale,” he said. Bedi had joined the BJP Jan 15.
Shah dismissed suggestions that there were differences among party leaders over Bedi’s projection as chief ministerial candidate.
“Every worker is one on this,” he said.
The BJP’s decision on naming Bedi, 65, as chief ministerial candidate came after feeling in the party leadership that it needed a credible local face to take on Kejriwal who has strong anti-corruption credentials. AAP finished close to BJP in the 2013 assembly poll.
The party’s decision came just two days before the end of nomination process for the Feb 7 poll election to the 70 member assembly.
Bedi has been an anti-corruption activist, a former tennis player and her innings in Delhi Police is still widely remembered in the city. She initiated prison reforms in the Tihar Central Jail when she was heading it.
She has won the Ramon Magsaysay award, an honour she shares with Kejriwal. Both were part of the anti-corruption agitation led by Gandhian Anna Hazare.
Since her induction in the BJP, Bedi has talked about her priorities — as a likely candidate to lead the party’s campaign.
Asked about change in the stance of party as it had earlier said it will not project a chief ministerial candidate, Shah said that party had also projected chief ministerial candidates in states such as Rajasthan and Madhya Pradesh.
“There is an atmosphere. A decision is taken after taking into account all factors, the political factors,” he said.
Before it took decision to induct Bedi and project a local face, the BJP in Delhi appeared to bank mainly on Prime Minister Narendra Modi.
Answering a query about Bedi being an outsider, Shah said that that party had provided platform to people from various fields and they had delivered successfully.
“The decision was taken with consensus. It has support of all,” he said.
Shah said the party will continue to have tie-up with Shiromani Akali Dal in Delhi.
On Bedi, he said: “She has lived in Delhi throughout her life. She is a well-known name in the fight against corruption and in service of people.”
Answering a query, he said that decision to field Bedi from Krishna Nagar, a “traditional seat” of the party, had been taken so that she could devote time to campaign in all the seats.