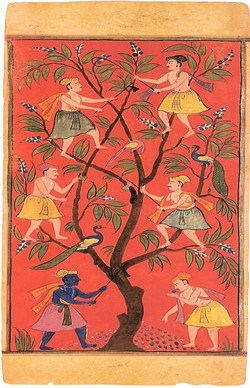 Lesya, according to the Jain theory of karma, is the coloring of the soul on account of its association with the karmic matter. The color of leśyā varies from person to person depending on the psychic states and mental activities behind an action. The coloring of the soul is explained through the analogy of crystal, that acquires the color of the matter associated with it. In the same way, the soul reflects the qualities of color, taste, smell and touch of associated karmic matter.

In Jainism, there is a great deal of importance given to Leshya. It refers to the state of Mind. Our activities reflect our state of mind. The following illustration shows how our activities vary with the state

of our mind. Once there were six friends who were going on a trip, but along the way got lost in a forest. Soon they became hungry and thirsty. They searched for food for some time and finally found a fruit tree.

As they ran to the tree, the first man said, “Lets cut the tree down and get the fruits.” The second one said, “Dont cut the whole tree down, cut off a big branch instead.”  The third friend said, “Why do we

need a big branch?  A small branch has enough fruit.” The fourth one said, “We do not need to cut any branches, just climb up and take the bunches of fruit.”  The fifth man said, “Why pick that many fruits and waste them, instead just pick the fruits that you want to eat.”  The sixth friend said quietly, “There are plenty of good fruits on the ground, so let us just eat them first.”

You can see that the states of minds of these six friends cause a range of thoughts which begin with the destruction of a tree and end with picking up what is on the ground. The six friend’s minds represent six types of leshyas.

The first leshya is the worst and the sixth leshya is the best. The first three leshyas lead the soul to ruin and the last three lead the soul to spiritual prosperity.  Therefore, people should strive for the white leshya and not the red leshya. It is not so that a person’s state of mind remains the same at all times and therefore, it can be changed for the better or for the worst.

Let us understand the characteristic of personalities and the outcomes resulting different leshyas:

People in this state of mind do not show no compassion or mercy. Everyone is afraid of them as their anger turns into violence.  They always burn with jealousy and have ill-will for everyone.  They are

filled with animosity and malice and do not believe in religion. This state of mind is the worst and most dangerous as if anyone dies in this state may get the Narak Gati. someone who acts on the impulse of the five sins, does not possess the three guptis, has not ceased to injure the six (kinds of living beings), commits cruel acts, is wicked and violent, is afraid of no consequences, is mischievous and does not subdue his senses – One of such habits develops the Krishna leshya.

People in this state of mind are proud, haughty, and lazy.  They are unreliable and other people avoid their company.  They are cheaters, cowards, and hypocrites.   Such people also avoid the religious

lectures.  If anyone dies in this state of mind, they will be reborn as a plant. Someone of the following qualities: envy, anger, want of self-control, ignorance, deceit, want of modesty, greed, hatred, wickedness, carelessness, love of enjoyment; a man who pursues pleasures and does not abstain from sinful undertakings, who is wicked and violent – One of such habits develops the blue leshya.

People in this state of mind always remain sad and gloomy.  They find faults in others and are vindictive.  They boast about themselves, become excited over small matters, and lack mental balance.  If anyone

dies in this state of mind, they will be reborn as a bird or an animal. someone who is dishonest in words and acts, who is base, not upright, a dissembler and deceiver 3, a heretic, a vile man, a talker of hurtful and sinful things, a thief, and full of jealousy – One of such habits develops the grey leshya

People in this state of mind are very careful about their actions and discriminate between good and evil. They know the difference between what is right and what is wrong.  They are kind, benevolent, and

religious and lead a harmonious life.  If anyone dies in this state of mind, they will be reborn as a human being. Someone who is humble, steadfast, free from deceit and inquisitiveness, well disciplined, restrained, attentive to his study and duties, who loves the Law and keeps it, who is afraid of forbidden things and strives after the highest good–One of such habits develops the red leshya

People in this state of mind are kind and benevolent and forgive everyone, even their enemies. They observe some austerities and are vigilant in keeping their vows till their last breath.  They remain

unaffected by joys and sorrows.  If anyone dies in this leshya, they will be reborn in heaven as a celestial being. Someone who has but little anger, pride, deceit, and greed, whose mind is at ease, who controls himself, who is attentive to his study and duties, who speaks but little, is calm, and subdues his senses–One of such habits develops the yellow leshya.

People in this state of mind strictly observe the principles of non-violence, truth, non-stealing, celibacy, and non-attachment.  They are trustworthy, treat every soul as if it was their own soul, and do

not have ill feelings even for their enemies. They remain calm even if someone abuses them. If anyone dies in this state of mind, they will be reborn as a human being or an angel. People who perfect this state of mind have no attachment or hatred and treat everyone alike. They do not become happy or sad. Their state of mind is the purest.  If anyone dies in this perfected state of mind, they will be liberated from the cycle of birth and death. Someone who abstains from constant thinking about his misery and about sinful deeds, but engages in meditation on the law and truth only, whose mind is at ease, who controls himself, who practises the samitis and guptis, whether he be still subject to passion or free from passion, is calm, and subdues his senses–One of such habits develops the white leshya.

It is not so that a person’s state of mind always remains the same and therefore, it can be changedfor the better or for the worst. The popular story of King Prasanraj, who lived during Lord Mahavira’s time, illustrates the effects of leshays. One day King Shrenik was on his way to pay homage to Lord Mahavira and on the way he saw a sage who was meditating and illuminating very brightly. He bowed down to the sage and continued his way to pay homage to Lord Mahavira. After reaching Lord Mahavira, King Shrenik asked the Lord, “Oh Lord, I saw a very illuminated sage who was engaged in meditation on the way here.  Supposing he died at that moment, what state would he have acquired? The Lord replied, “He would have been hurled down to the seventhhell-region.” The king was much astonished to hear this reply from the Lord.  He thought, “Why would such a sage go to hell? Perhaps the Lord might have misunderstood me.”  He asked the Lord again, “Oh Lord, if the sageleaves this body just now, then what state will he attain?” The Lord replied, “He will be an angel in Sarvarthasidha, a heavenly region.” The king was much surprised at this reply, too.  He thought, “The Lord first said he would attain the seventh hell and now he says that the sage would be an angel.”  The king was perplexed.  At that very moment drums began sounding in the sky and voices of `victory’ were proclaimed.  The king asked the Lord, “What is the cause of these sounds?” The Lord said, “Oh, king, the sage about whom you were inquiring has acquired omniscience and so the angels are beating the drums and proclaiming `Victory’.” The king was extremely surprised by these answers and therefore, he requested the Lord to explain them. Thereupon the Lord said, “Oh king, right before you approached the sage, two soldiers leading your procession diverted the mind of the sage by their conversation. His mind began thinking about his kingdom where his ministers turned out to be untrustworthy and would eventually kill hisson.  He was inflamed with rage and he lost his mental equanimity. Therefore, he started mentally fighting against his ministers. He very violently discharged his weapons one after the other against hisministers.  Soon his weapons were exhausted and his foes were not destroyed.  So, he thought of throwing his steel helmet against them in order to destroy them. You bowed down to him at that time when he was reflecting on such thoughts. I, Therefore,  replied that he would attain the 7th  hell. Thereafter, when the sage placed his hand on his head for the steel helmet, he realized that he was not King Prasanraj but that he was a sage. His anger calmed down immediately.  He remembered that he hasbeen initiated into the vow of equanimity and of non-violence to any living being mentally, verbally, and physically.  He deeply regretted and repented for the breach of his vow and indulgence in acute anger.He further thought that he ought to have maintained love for all creatures of the world, ought to have no malice for the ministers, and no attachment for his son.  He severely condemned his mental act.  Hedespised it and withdrew himself from such a feat of anger and malice. Oh king, when he thought this way, you asked me the next question and I replied that he would be born in the Savartha Siddha (heaven) as an angel.  Even thereafter, he continued the purification of his mental reflections and gradually he reached the stage of `Kshapaka’,  where he annihilated all of his ghati karmas, and attained omniscience.” King Shrenik’s doubts were resolved and he learned how mental reflections can fluctuate. He also learned that not only can physical acts or verbal abuses have such devastating effects, but so can mentalacts.