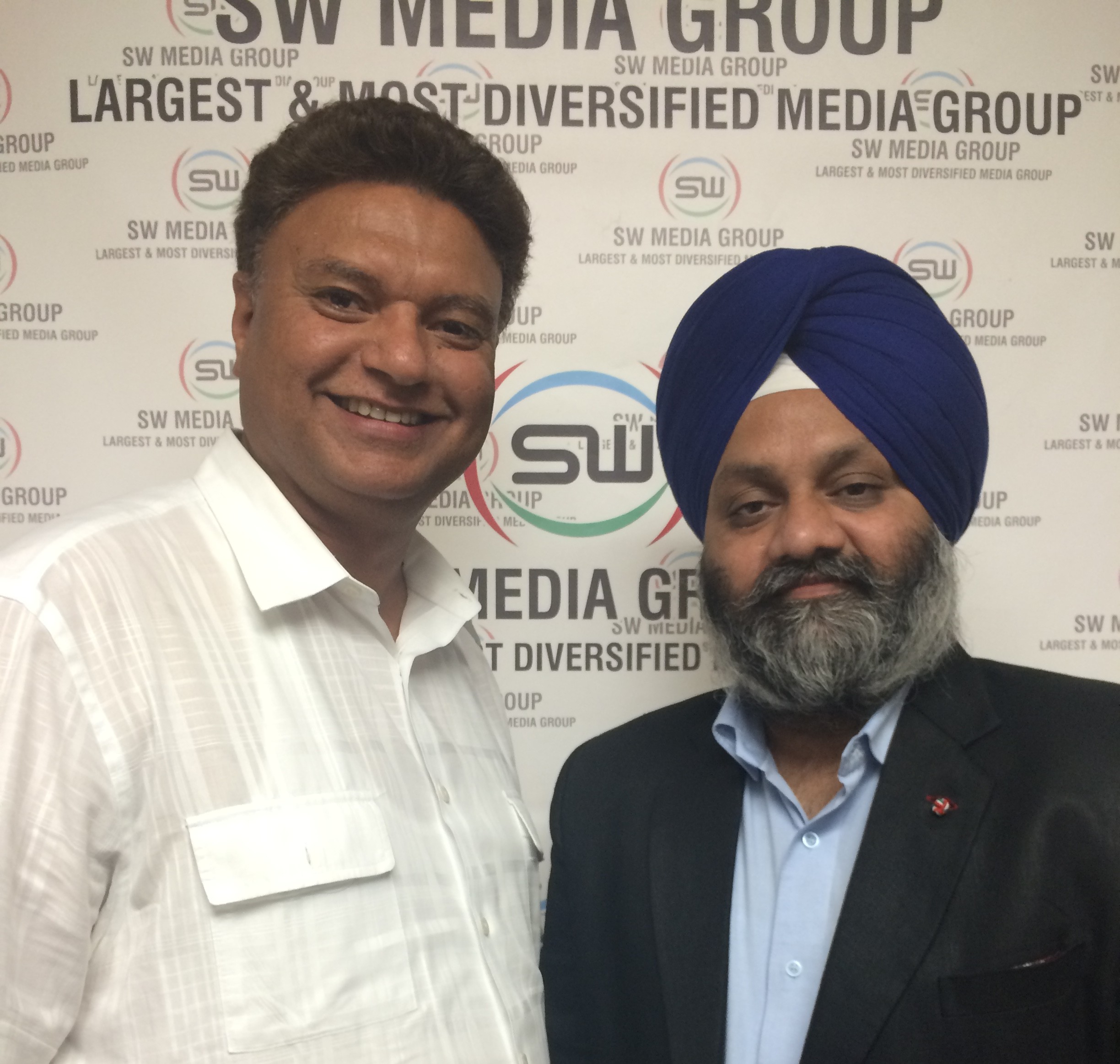 “We are here to project real image of Punjab and the Punjab Govt.”
Inder Iqbal Singh Atwal

Punjab’s Ex-MLA Inder Iqbal Singh Atwal, who is one of the delegates of SAD on mission Canada visited SW Media Group premises during his Vancouver visit and shared the agenda of assignment. Atwal is part of Tota Singh’s group, which also includes Mahesh Inder Grewal, Advisor to Punjab Deputy Chief Minister, Hockey legend and MLA Pargat Singh.
Inder Iqbal, who is son of Punjab Legislative Assembly Speaker Charanjit Singh Atwal, told Asian Journal that he is here to project positive image of the party and development performed by his party president Sukhbir Badal.
Atwal said that Non-resident Indians here in Canada are not aware of the reality in Punjab and they are misinformed on the development taking place in the state. He is holding few groups responsible for this and a section of media making wrong perception of Akali Dal and Punjab’s SAD-BJP government.
Atwal said, “It is the negative agenda of few people who want to malign image of Shiromani Akali Dal. Punjab is not the same as being projected by a section of media here. We are here to project the reality.”
He added, “That is why we are here, to change the perception and to project the real (positive) image of Punjab and work performed by SAD-BJP government”
Atwal said, “I urge those people to let Sukhbir come here once and talk to him. If they have any complaints, our leader is willing to sit with them and solve them.”
When asked how can few people stop Sukhbir to visit Canada, Atwal said, “He has visited USA several times, he gets warm welcomes from NRI’s there. But for visiting Canada, security reasons are the biggest hurdle for him. Whenever Sukhbir plan to visit Canada, few so-called activists manipulate negative propaganda against him. Keeping in mind to those threats as security risk, security agencies never gave clearance to his visit.
Atwal compared Sukhbir Badal’s charisma with Indian Prime Minister Narendra Modi, said, “Let Sukhbir Badal visit here, people’s perception will change as it changed for Modi. People will like Sukhbir as they liked Modi. Whereas before, Modi was target of such people, same as Sukhbir is victim of negative publicity here.”
“I am sure, the negative propaganda against Sukhbir will turn positive once residents here listen to Mr. Badal,” Atwal said.
Atwal also added that while talking to the people they received feedback that our government has not done anything, which is not a true picture of the Punjab today. He added that SAD-BJP is working hard and development is taking place everywhere in Punjab at large scale.
Atwal added, “Before Manpreet Badal misguided NRI’s. Now AAP is misleading Non-residents that nothing is being done in Punjab by SAD-BJP govt.”
After Vancouver, his group will be visiting Toronto, New York, San Francisco and Los Angeles.