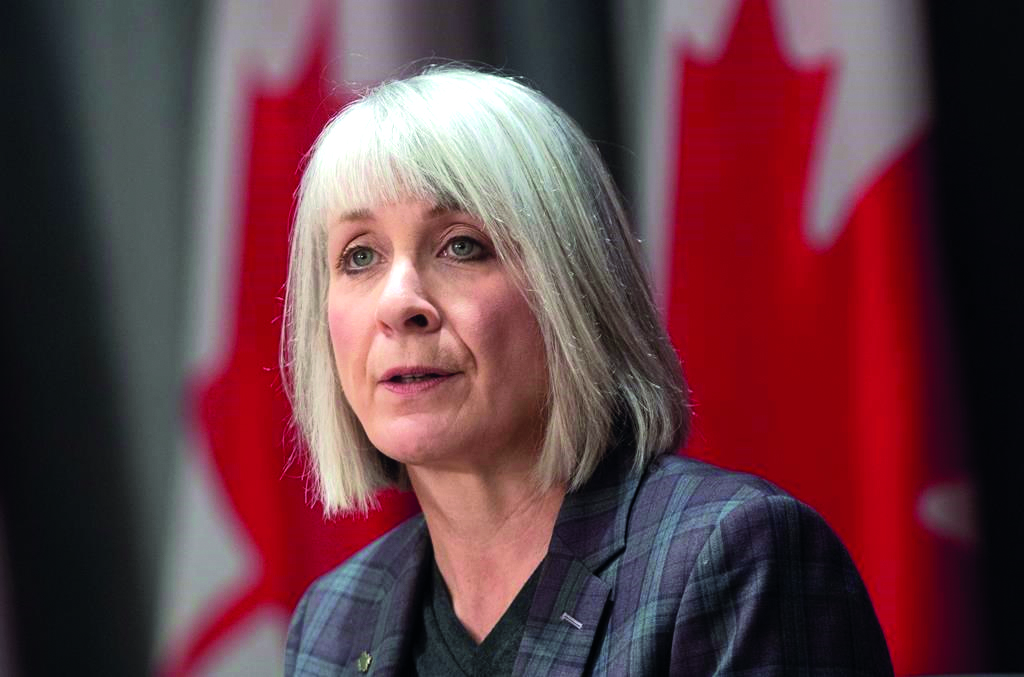 Ottawa: The Liberal government is taking steps toward promised changes to federal drug policy and looking at how to reduce opioid-related deaths during the pandemic.
Ottawa launched a national consultation on supervised-consumption sites this week, seeking comments from a variety of Canadians, including those who operate the sites and those who use them. “The evidence shows us that supervised-consumption sites and services save lives and can provide people who use drugs with access to health and social services and treatment,’’ federal Health Minister Patty Hajdu said in a statement Thursday.
“As we see the COVID-19 outbreak worsening the situation for Canadians struggling with substance use disorders, it is more important than ever to ensure support is available. The feedback we are gathering from communities across Canada will help us to better understand how we can continue to help Canadians and save lives.’’

The federal government also announced Thursday it was committing $582,000 in funding for a new Toronto project to offer a safe supply of opioids to reduce overdose deaths during the COVID-19 pandemic.

Health Canada also granted a federal exemption to a Toronto health-care centre to operate an overdose-prevention site at a COVID-19 isolation shelter until late September.

This site will help people who use drugs to be in a monitored, safe environment while also allowing for proper physical-distancing and self-isolation measures, the government says.

These initiatives come in the wake of a concerning spike in opioid-related deaths since the pandemic began in Canada.

British Columbia registered a record number of monthly drug toxicity deaths in June after 175 people were killed by overdoses _ the second consecutive month of record high overdose deaths. Overdoses also killed 201 people in Ontario in June, the highest number of drug-related deaths in a single month in that province.

Health and law enforcement officials across Canada are calling for more immediate actions by provincial and federal governments.

“With COVID-19 we’re trying to change people’s behaviour, we’re trying to get people to social distance and follow good public health guidelines. Well, decriminalization would be the same,’’ MacPherson explained.

“We’re trying to change the police’s behaviour, so that they become part of the team that helps people as opposed to putting fear into people who possess drugs and we’re trying to change the behaviour of people who possess drugs by saying, ‘Look, you’re not a criminal anymore. Come into health services. Let us know who you are and we’ll try and help.’’’

Separately, federal prosecutors are now also being instructed to criminally prosecute only the most serious drug possession offences that raise public safety concerns and to find alternatives outside the criminal justice system for the rest, including simple possession cases.

That directive is contained in a new guideline issued by the director of public prosecutions, Kathleen Roussel, who is independent from the federal Justice Department.

In all instances, alternatives to prosecution should be considered if the possession offence involves a person enrolled in a drug treatment court program or an addiction treatment program supervised by a health professional, the guideline says.

The same applies in cases that involve a violation of bail conditions and can be addressed adequately by a judicial referral hearing, as well as cases where the offender’s conduct can be dealt with by an approved alternative measure, including Indigenous and non-Indigenous restorative justice responses.

Criminal prosecution for possession of a controlled substance “should generally be reserved for the most serious manifestations of the offence,’’ the guideline says.

The guideline outlines specific types of conduct that would generally warrant criminal prosecution, including: risks to the safety or well-being of children or youth; conduct that puts the health or safety of others at risk, such as driving while impaired, operating machinery or possessing a weapon and behaviour that breaches rules in a regulated setting’, such as prison.

The purpose of the guideline is to articulate “a principled prosecutorial litigation approach to the well-documented realities about the health impact of substance use while acknowledging that certain drug use may present particular public safety concerns.’’

That seems consistent with the federal Liberal government’s approach to illegal drugs as being more a public health issue than a criminal one.

In their first mandate, the Liberals legalized the recreational use of cannabis. However, Prime Minister Justin Trudeau rejected calls to decriminalize possession of other harder drugs, despite a resolution passed at the last Liberal convention calling for such an approach.

MacPherson says the drug policy measures Ottawa is taking are mere baby steps compared to what is needed.

“This is the worst overdose crisis in the history of the country, in the midst of a global pandemic, and the rate that overdose deaths are accelerating in British Columbia, in Ontario and in other provinces demands a much stronger response.’’

By Teresa Wright and Joan Bryden
The Canadian Press