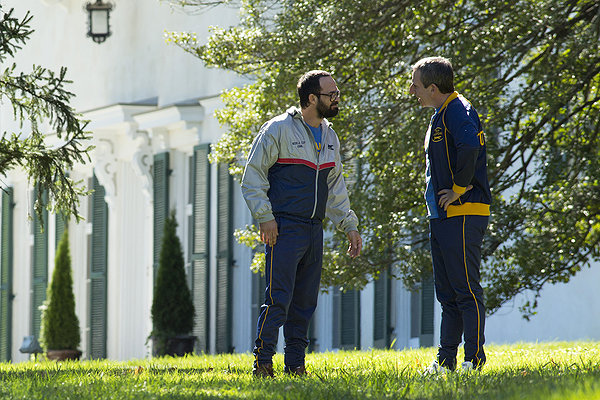 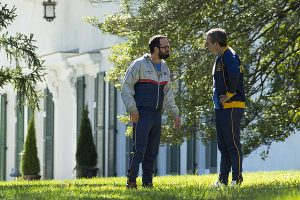 Aim for the top and you just may succeed. A  man’s quest for gold and a desire to succeed form the foundation for a battle royal  in Foxcatcher. Based on a real story this jarring tale from Sony Pictures Classics is now making waves at the Fifth Avenue cinemas.
Change can be good in anyone’s life.  Impressive as hell is the work of Steve Carell who leaves his comic personality at home to play a driven John Du Pont.  Blessed with money this patriot has a vision: make the U.S. #1  In the world of wrestling. While this moneybags goes about this quest a wrestler called Mark Schultz is at a crossroads In His career. Also Going against type is Channing Tatum who puts all those male dancer moves to good use when he gets in The wrestling ring.
Together these two make quite the pair and their personalities are like fire and ice.  Hot and cold blows their relationship with Mark’s brother Dave also figuring into this life long pursuit of sports supremacy. Mark Ruffalo also is enlightening as a brother who wants only the best for his younger charge.
A touch long  Foxcatcher shines a light on the world of big competitive sports and the egos of men who want to harness that energy. Tense and timely Foxcatcher is an engaging drama full of raw emotion both inside and outside the mat.