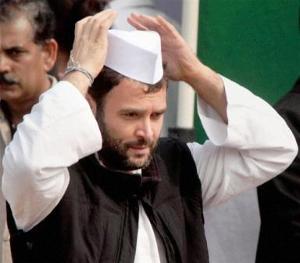 New Delhi, March 14 (IANS) The Lok Sabha Ethics Committee has served notice on Congress vice president Rahul Gandhi, asking if he had ever declared himself a British citizen.

“The ethics committee has served Rahul Gandhi a notice and will act on the matter only after a reply from the Congress member,” BJP MP Arjun Ram Meghwal told reporters here on Monday.

Meghwal is a member of the ethics committee headed by senior party leader L.K. Advani.

In response, Rahul Gandhi told reporters: “We will deal with that.”

However, Congress leader Randeep Surjewala targeted the Bharatiya Janata Party over the notice and said that the “campaign by the BJP leadership was mala fide and defamatory”.

“As for the repeated questions being raised outside parliament about Rahul Gandhi’s citizenship, particularly by BJP leaders, these are nothing more than the continuing political vendetta of the BJP and its leadership against the Congress leadership,” Surjewala told the media.

He said the facts in this matter can be easily verified by the government.

Surjewala said the Congress will reply to the notice on a complaint of ethical misconduct in conformity with parliamentary procedures and the party shall not comment on it in the media.

Meghwal told reporters that Rahul Gandhi had been issued the notice to seek his response if he had once declared himself a British citizen.

“The complaint was received by the speaker (Sumitra Mahajan) and she forwarded the complaint to the ethics committee,” Meghwal said.

Surjewala said Rahul Gandhi need not prove his credentials as an Indian.

Instead of trying to malign the image of the Congress, the government should focus on bringing back to the country the likes of liquor baron Vijay Mallya, who is accused of defaulting on bank loans, the Congress leader said.

Congress Rajya Sabha MP P.L. Punia said that the BJP’s allegations about Gandhi’s citizenship were baseless and added that these “must be rejected outrightly”.

“When the BJP does not have anything concrete to say against the Congress, they have a habit of making personal attacks against its leaders,” he said.

Minister of State for Parliamentary Affairs Mukhtar Abbas Naqvi, however, told reporters that the Congress needs to clarify on the matter.

BJP leader Subramanian Swamy had alleged last year that Gandhi declared himself as a British national in the annual return of a company in Britain.

In a letter to Prime Minister Narendra Modi, Swamy alleged that Gandhi was a director in Backops Limited, which was incorporated in 2003 in Britain and dissolved in 2009.

Swamy alleged that Gandhi had “given his date of birth correctly but declared himself to be of British nationality with a UK address”.

The letter said the Congress leader had “prima facie, committed an unconstitutional act and therefore was liable to be stripped of his citizenship and membership of the Lok Sabha”.

The Congress had then termed Swamy’s allegations as “petty and mindless mudslinging” and said the party rejects them “with the contempt that they deserve”.

Following the controversy, BJP MP Maheish Girri had written to the Lok Sabha speaker on the issue and the matter was later referred to the ethics committee.