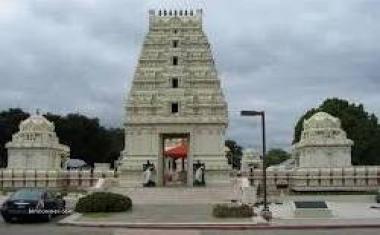 New York, July 24 (IANS) A state-of-the-art Sri Venkateswara Temple with an eight-feet granite statue of Lord Venkateswara will be constructed in the US city of Columbus in Ohio state, a media report said.
It will be the second temple after the Bharatiya Hindu Temple that opened in the area in 1994, the Columbus Dispatch daily reported.
It will be “a state of the art temple, spread over at least 20,000 square feet with a capacity to accommodate at least 1,000 worshippers”, said Ganesh Vathyam, a spokesperson of the temple committee.
It will include an ornate, colourful towering entrance called “gopuram” and a brass or copper covered flagstaff called a “dwajasthambam”, he added.
The committee is also planning to bring sculptors from India to build the temple and early projections put the cost at about $3 million.
“Our goal is to introduce this culture not only to our kids — because the reason we build temples is to let our future generations know the significance of the temple and the heritage — but also to introduce it to the other side of the world,” Vathyam said.
The temple plans a four-day grand opening ceremony from July 30 to August 2 to enshrine Lord Venkateswara.
The celebrations will also bring three other deities into the temple “Ganesha, Garuda and Hanuman”, it added.