About thirty invited stakeholders attended a round-table consultation this past week, kicking off a second round of public consultations. The audience received an update on the plans for the Surrey Light Rail project “L” line, and project team members from both the City of Surrey and TransLink participated in a round-table discussion to answer questions and gather feedback on the project.

The group was told that current plans called for the construction of Phase One of the LRT line, the so-called “L” line from Guildford to City Centre to Newton, to begin in 2019 and complete four years later in 2023. It will offer eleven stations.

The current round of consultations is designed to gather public input on LRT Operations, including access and network connections, stop (station) design and features, roadway and transit integration, as well as minimizing environmental and construction impacts.

Phase two, connecting King George Station to Langley City, via the Fraser Highway, is looking at an “eight to twelve-year horizon,” and there is yet to be a decision made as to whether this will use LRT or SkyTrain technology.

The group was told that LRT systems are becoming more plentiful in Canada. Surrey is one of eleven cities now undertaking LRT projects. There are two in Ottawa, three in Toronto, one each in Hamilton, Waterloo, and Mississauga. Edmonton and Calgary are also building LRT projects to supplement their current systems.

The Guildford to Surrey Central line drew the most comment and concern over plans which will reduce 104th Avenue from two vehicle lanes to one each way, particularly as it is currently a major arterial to and from Highway #1 and the city centre. Concern was expressed as to whether access was adequate for businesses along 104th as well as access by emergency vehicles along that corridor.

Facilitators said the plans to reconfigure 104th would be balanced by upgrading several parallel corridors. 105th and 108th Avenues will be expanded, and 100th Avenue is currently being widened to carry east-west truck and automobile traffic. The group was told that the light rail ROW, although raised above the road surface, will be paved with rounded curbs which will allow emergency vehicles to drive upon it or easily make U-turns across it as necessary.

Other concerns included “Stop” locations in the middle of the streets; left turn issues for traffic; whether or not “park and ride” provisions would be included at main centres; and how fare evasion and on-board security would be dealt with. 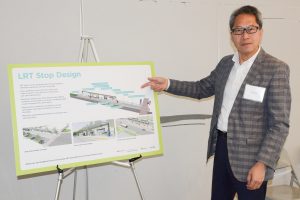 Within the next two years, in preparation of the 2019 start of construction, along with the expansion of 100th Avenue, other preliminary work includes raising the height of the transmission lines where they cross 104th Avenue and replacement of the Bear Creek bridge on King George Blvd just south of 88th Ave. 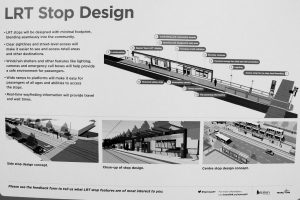 “One of the things I can say based on my experience doing other similar events,” said Mehr, “is, there is a lot of interest and people were listening to what we had to say. That’s very encouraging. I think the energy is right and the questions were the right questions in that they need to make the team think about what it needs to do next.”

“This is the second round of public engagement,” said Paul Lee, “and it’s apparent that the people in the room are very passionate, or curious, about the system and how will we manage the traffic and the changing traffic patterns along 104th Avenue and King George Blvd. This is great input for the project team. I think it’s the right time for this project, and I think we just have to address all the concerns that we heard today. I think there’s a buy-in on how we are going to use Light Rail to shape and build the communities that we want to see.”

This phase of Public consultation kicked off June 13 and will continue until July 7. There are a number of Consultation meetings across the city. Details of the project and a schedule of public meetings is available online at surrey.ca/city-services/15698.aspx or translink.ca/surreylrt