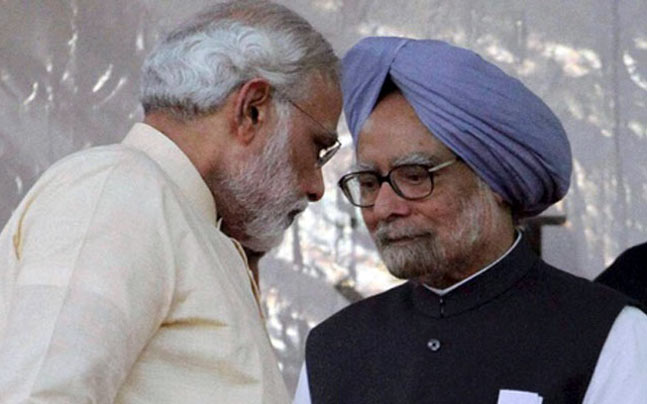 Terming Mahatma Gandhi National Rural Employment Guarantee Scheme (MGNREGS) as a gift of his United Progressive Alliance government, he said the people should rise to ensure that National Democratic Alliance government does not tinker with the effectiveness of the scheme.

He was addressing a public meeting along with Congress vice president Rahul Gandhi at Bandlapalli village in Anantapur district of Andhra Pradesh to mark 10 years of the programme.

It was in this village in 2006 that Manmohan Singh as the then prime minister and UPA chairperson Sonia Gandhi had launched the programme.

Manmohan Singh alleged that Modi government is trying to kill soul and spirit of this programme by withholding payments to state for works under the scheme, noting that in 2014-15 alone, the central government did not make payment of Rs.6,000 crore to states for already executed works.

“Despite enormous potential of MGNREGA as a social security programme, PM Modi does not like it. He has called MGNREGA as an epitome of Congress failure and a living example of 60 years of Congress misrule,” said the Congress leader.

He said the scheme was a gift of UPA to assist people fight poverty, ignorance and disease.

Stating that it has a clear focus on poorest of poor in rural areas, he said that it reaches out to those who seek livelihood security and comes to the aid of those under pressure to migrate in search of livelihood. He described as a unique social security system which confers upon groups the right to demand work when they need the most.

He recalled that UPA had launched the scheme in 2006 initially covering 200 districts in 27 states to provide guaranteed employment to rural households for 100 days. In 2008 the coverage extended to include all districts and in following six years, an amount of Rs. 2 lakh crore were allocated under MNREGA scheme.

The employment guarantee act was the “most significant legislation of our times in many ways as for the first time rural communities have been given not just a development programme but a regime of rights”, he said.

“This act unlocked potential of rural poor to contribute to reconstruction of their environment by doing this it can accelerate growth of rural economy as a whole,” he said, adding it not only gives poor a chance to live a life of self respect and dignity and in particular, helped scheduled castes, scheduled tribes, women and small and marginal farmers.

Rahul Gandhi, who interacted with some beneficiaries of the scheme, said during last 10 years, it lifted 1.4 crore people out of poverty.

He said one out of five worked under MNREGA and for the first time crores of people in rural areas had money in their pockets.

He said people came from various countries hailed the scheme and told him that they want to replicate it, while the World Bank and the United Nations appreciated the programme.