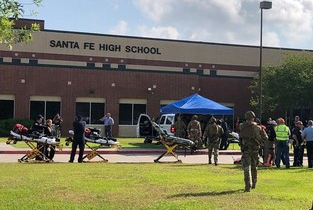 Texas: Many people were killed and some injured in a shooting on Friday at the Santa Fe High School in Texas, according to law enforcement officials. A suspect has been taken into custody.

At least three people were killed, according to Mark Henry, the Galveston County judge, the county’s top elected official.

The injured included at least one police officer, whose condition is not known, Ed Gonzalez, the Harris County sheriff, said on Twitter. In addition to the suspect in custody, another person has been detained, he said.

The gunman opened fire inside the school at about 7.45 a.m., around the time the school was about to start for the day, according to Joe Giusti, a Galveston County commissioner, the New York Times reported.

He said the injured officer worked for the Santa Fe school district as a school resource officer.

The Santa Fe Independent School District said that law enforcement agencies were securing the building and that students were being transported to the nearby Alamo Gym, where parents could meet them. Santa Fe is 20 miles west of Galveston, in Galveston County.

Another student told the station that a gunman entered her art class with what looked like a shotgun and began shooting at students. She said she saw a student get hit in the leg before she and others started running.

The Santa Fe Police Department, Harris County Sheriff’s Office, Galveston County Sheriff and Bureau of Alcohol, Tobacco, Firearms and Explosives all said they were assisting in the response.

President Trump commented on the shooting in a tweet: “Early reports not looking good,” he said. “God bless all!”