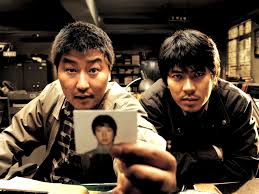 Thanks to fear gripping part of the film going marketplace now is a perfect time to catch up on some old films most worthy of your attention. Wise Elevation Pictures hits the mark by introducing British Columbia viewers to Memories of Murder. Catch this one of a kind police tale on video on demand by simply contacting your local cable carrier or internet company. Or head out to your local carefully sanitized Cineplex International Village Cinema to get the big screen effect social distancing and masked up for indoor viewing but of course.
Smart programming and releasing by Elevation let’s you see man of the moment director Boon Joon Ho at his best with this earlier effort. You get to see the genesis of the break-out Parasite Director in full bloom here. As expected Memories of Murder is about a Murder. Or two or three. You guessed it we witness some cops out to find the guilty culprit (s). Set in a small Korean town in 1986 here we have two bumbling C grade police officials trying to solve the case. These guys are a cross between ace sleuth Colombo and French bumbler Inspector Clouseau so you get the picture. Things change for the better when a new detective arrives on the scene,
Well acted and full of twists and turns Memories of Murder will appeal to those who like crime stories and will hold your attention,