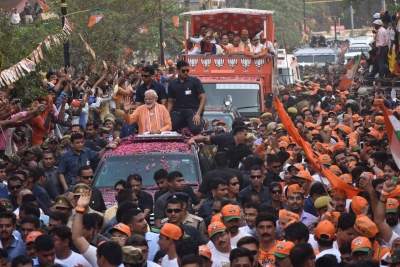 Lucknow: Cheered on by a massive crowd, Prime Minister Narendra Modi held a mega road show in Varanasi, a day before he filed his nomination papers for a second term in the Lok Sabha.

Huge crowds turned out to cheer the Prime Minister who was symbolically dressed in a saffron kurta and ‘angavastram’. Though the road show started almost two hours late, there was no depletion in people’s enthusiasm.

Modi began his journey from the Banaras Hindu University (BHU) where he paid tributes to the statue of Pandit Madan Mohan Malaviya.

The road show meandered through the ancient temples and ghats such as Assi, Bhadini, Sonarpura, Madanpura, Jangambari and Godowlia and culminated at the Dashashwamedh Ghat where the Prime Minister held a ‘puja’ and attended the ‘Ganga pujan’ after the Ganga ‘aarti’ which had been delayed. The ‘Ganga aarti’ is held at 6.50.p.m everyday but today it was held almost an hour behind scheduled.

Just before he began his road show, the Prime Minister tweeted “Grateful for warmth and affection”.

Ramlila artistes from one of the city’s oldest troupes, the Mauni Baba Ram Lila Committee which is 522 years old, accompanied the convoy.

Its manager Vikram Bhardwaj said, “Lord Ram’s Sena is with PM Modi,” pointing towards actors dressed as Hanuman, Angad, Nal and Neel — the monkey army from the epic Ramayana.

The show of strength, incidentally, took place on a day when the Congress put to rest all speculation about Priyanka Gandhi Vadra contesting from Varanasi and announced the candidature of Ajay Rai as the party nominee.

On Friday, the Prime Minister will address a gathering of BJP workers before visiting the famous Kal Bhairav temple in the city. He will then visit the city’s collectorate to file his nomination papers.

For the Prime Minister, the election in Varanasi is now a cakewalk with the Congress and the SP-BSP alliance having fielded light weight candidates. The Congress has named Ajay Rai who had in 2014 contested against Modi and ended up at the third position. The alliance candidate Shalini Yadav is daughter of senior Congress leader Shyamlal Yadav and had lost the mayoral polls in Varanasi.

Varanasi will go to polls in the last phase on May 19.