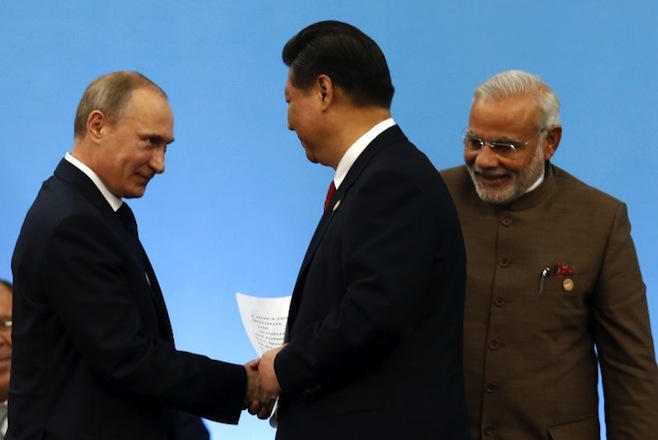 Ufa (Russia), July 8 (IANS) Prime Minister Narendra Modi on Wednesday held talks with Russian President Vladimir Putin and China’s Xi Jinping, during which all bilateral issues were discussed.
Modi held talks with Putin within hours of landing in Ufa for the BRICS and SCO summits, and afterwards held an 85-minute talk with Xi.
His meeting with Xi comes over a month after the two leaders met at Xi’an in China in May.
Putin conveyed to Modi that the process of India’s accession into the Shanghai Cooperation Organisation (SCO) has begun.
Putin, the host of the BRICS and SCO summits being held in this Russian city, told Modi: “We are beginning the process of full-fledged inclusion of India into the Shanghai Cooperation Organisation.”
Putin said it was “a very important event”.
Modi thanked Putin, saying: “Under your (Putin’s) leadership in BRICS, India has become a member of SCO. I am very grateful.”
India and Pakistan, both observers of the China-led bloc, are to be made permanent members of the SCO.
Modi, who arrived earlier in the day from Kazakhstan, thanked Putin for the warm welcome and also for observance of the International Day of Yoga in Russian cities on June 21.
Putin said jocularly that he has not tried to do yoga yet, though he is all for it.
With Xi, the talks also touched on the border issue and trade.
“An in-depth discussion covering all aspects of bilateral relations. 85-minute long meeting between President Xi & PM ends,” external affairs ministry spokesperson Vikas Swarup tweeted.
“Our fifth meeting in a year shows the depth of the India-China relationship. PM @narendramodi tells President Xi,” according to another tweet.
“From a spring meeting in China to a summer one in Russia – for the second bilateral of @BRICS2015, PM with President Xi,” he tweeted again.
According to Foreign Secretary S. Jaishankar, the talks covered the border issue and the work the Special Representatives have been charged with to make “accelerated progress on the boundary question” as well as the possibility of more meeting points between their forces on the border, he told reporters after the talks.
India’s application for membership to the Nuclear Suppliers Group was also taken up during the talks with China as well as counter-terrorism, said Jaishanakr.
He said Modi’s talk with both leaders also dwelt on the China-led Asian Infrastructure Investment Bank (AIIB), of which India is one of the founding members and the second largest shareholder.
Jaishankar said a common theme was increasing cooperation within the SCO.
The Seventh annual BRICS Summit is set to take place July 9 in Ufa, while the SCO summit will be held on July 10.

Iraq sends additional troops to battle IS over key refinery