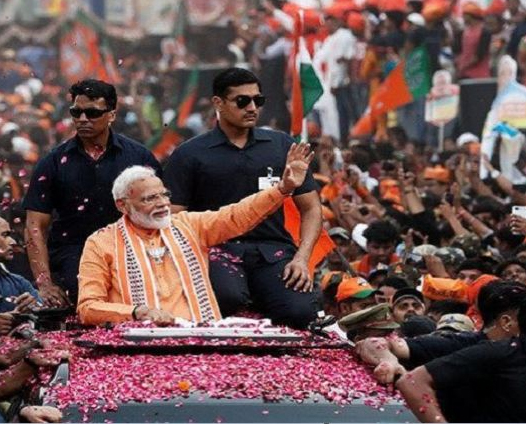 New Delhi: Prime Minister Narendra Modi on Thursday led the BJP to a stunning victory in the Lok Sabha battle, with the ruling party itself set to win 303 seats in a marked improvement over its 2014 showing that left the opposition dazed and demoralized.

And along with its allies, the BJP-led National Democratic Alliance (NDA) was poised to give another five years of governance, a development that sent the Sensex breaching the 40,000-mark as India Inc celebrated.

The NDA could end up with 343 of the 542 Lok Sabha seats where polling took place.

“India wins yet again!” tweeted Modi as it became clear that the Congress, India’s oldest political party that had mounted a major challenge to Modi, was set to be routed, winning just marginally more seats than the 44 it got in 2014.

Congratulations poured in for Modi, who was re-elected by over 4.75 lakh votes from Varanasi in Uttar Pradesh. BJP President Amit Shah was on the road to victory with an equally thumping margin from Gandhinagar in Gujarat.

In contrast, the Bharatiya Janata Party (BJP) swept state after state, including those ruled by the Congress. Its most spectacular results came in Uttar Pradesh where it was set to win 60 of the 80 seats, puncturing the SP-BSP alliance, while making major inroads in West Bengal by taking the victory lap in an unprecedented 18 of the 42 seats.

The saffron party was set to bag all 26 seats in Modi’s home state Gujarat, all 10 in Haryana, all seven in Delhi, all five in Uttarakhand, all four in Himachal Pradesh, both seats in Tripura as well as Arunachal Pradesh and the single seats of Chandigarh, Daman and Diu, Manipur besides a whopping 28 out of 29 in Madhya Pradesh, 24 out of 25 in Rajasthan, 41 out of 48 in Maharashtra along with the Shiv Sena, 25 out 28 in Karnataka, 11 out of 14 in Jharkhand, 9 out of 14 in Assam and 39 out of 40 in Bihar in alliance with the JD-U and LJP.

The Modi sweep crushed Congress President Rahul Gandhi in Amethi in Uttar Pradesh although he was elected to the Lok Sabha by over 4 lakh votes from Wayanad in Kerala. UPA Chairperson Sonia Gandhi, who had planned a meeting of opposition parties here on Thursday in the hope of dislodging Modi, was the sole Congress winner for the Congress in Uttar Pradesh (Rae Bareli).

The SP-BSP alliance, which was confident of tripping the BJP’s road to victory, suffered a blow in the country’s politically most critical state. The BSP was poised to win just 10 seats and the Samajwadi Party 6 as their caste formula got drowned by Modi’s election campaigning based mainly on aggressive nationalism.

The BJP’s years of efforts in West Bengal finally bore fruits as its candidates were set to emerge victorious in 18 places, washing out the once formidable Left and leaving the Congress punctured. The BJP won only two seats in 2014.

The Congress had something to cheer in Punjab, where it was set to win 8 of the 13 Lok Sabha seats, and Kerala, where it decimated the Left by winning 15 seats on its own while four seats went to its allies.

The DMK-led alliance made a clean sweep of Tamil Nadu and was set to take 36 of the 38 seats, leaving only 2 to the ruling AIADMK. The Congress, a DMK ally, won 8 seats.

Just Punjab, Kerala and Tamil Nadu accounted for 31 of the Congress party’s total 50 Lok Sabha seats. In many states, the Congress failed to open its account or won just one seat.

The ruling Biju Janata Dal (BJD) was poised to win 13 of the 21 Lok Sabha seats and also the Assembly elections. The YSR Congress Party stormed to power in Andhra Pradesh, dislodging the TDP, and could bag 22 of the 42 Lok Sabha seats.

The TRS performed relatively poorly in Telangana, with victory sighted in 9 of the 17 seats.

While former Jammu and Kashmir Chief Minister Farooq Abdullah of the National Conference was set to win in Srinagar, PDP leader and former Chief Minister Mehbooba Mufti conceded defeat in Anantnag, once her stronghold.

Around 67 per cent of the nearly 900 million voters exercised their franchise in the seven-phase elections that began on April 11 and ended on May 19. Election in Vellore in Tamil Nadu was countermanded by the Election Commission.