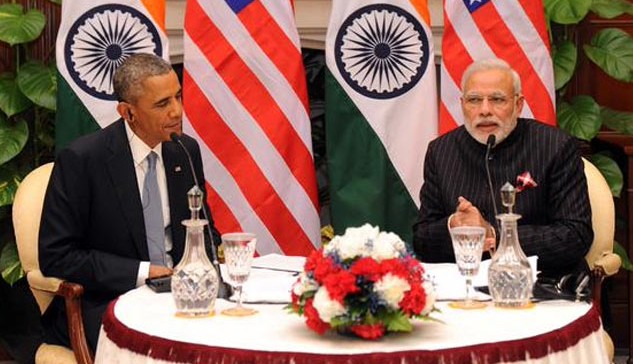 New Delhi, Jan 27 (IANS) It was history being made on radio. Prime Minister Narendra Modi and US President Barack Obama addressed a joint “Mann ki Baat” programme on radio, talking about their humble origins, their inspirations, on women empowerment and youth and values shared by two of world’s largest democracies.

The programme, which was recorded Monday but broadcast Tuesday, amply reflected the personal warmth and admiration of two leaders for each other and their common view on some problems.

Obama, taking a veiled dig at China and some other countries seen to regulate information flow through the internet, said he had much greater faith in open societies in their ability to succeed and thrive in the new information age than the “closed societies” which try to control information that citizens receive.

The personal chemistry between the two was evident with Modi referring to Obama by his first name.

Obama said it was apparently the first joint radio broadcast by leaders of the two countries.

No hard questions relating to politics or economy were taken up, though queries came from people in different parts of the country.

Modi set the tone for the over 30-minute broadcast saying that some questions “touch the heart” and through them the two leaders will be able to reach out to the common man in different parts of the country.

He also said he looked up the meaning of Barack, which means “one who is blessed” in Swahili.

“Along with a name, his family has given him a gift,” Modi said, adding African countries have lived by the ancient idea of “Ubuntu” which alludes to “oneness in humanity” and reflected the spirit of “Vasudhaiva kutumbakam (the world is a family).”

Obama, who spoke of the two countries being natural partners, added a personal touch, saying that he would bring his two daughters to India even if it happens after his presidency.

He said his daughters are fascinated by India but have not been able to come on his two visits to the country due to their examinations.

“So when I go back I am going to tell them that India is as magnificent as they imagined,” Obama said.

Modi said when he took a photograhph outside White House in his younger days, he could never imagine he would get to see the building from inside. Referring to his visit to the White House in September last year, Modi said Obama gave him a book of speeches delivered at the World Religions Conference in Chicago in the last part of nineteenth century.

Swami Vivekananda, who delivered a famous speech at the conference, was “the inspiration” of his life, he said.

Obama said he too never imagnied he would be occupying White House the first time he visited the building.

“The notion that a tea seller or somebody who’s born to a single mother like me, could end up leading our countries, is an extraordinary example of the opportunities that exist within our countries,” he said.

Obama revealed though there were days when it is tough and frustrating, he gets succour from change he is able to make in people’s lives.

“If you are helping somebody, the expectation you get from that is exceeds anyting else you can do,” he said.

He also also talked of improving health standards and his wife Michelle’s work in tackling obesity.

Asked about the American leader who inspired him the most, Modi named Benjamin Franklin, one of the country’s founding fathers.

He also revealed that the hospitality he received at a house of a poor person who could not afford milk for his son inspired him to devote his life to the service of the poor.

On the need of changing attitude towards the girl child to improve India’s sex ratio, he termed Obama an inspiration, referring to the way he brought up his two daughters.

He also sought to give youth a slogan of uniting the world.

Modi said there will be an e-book of their talk and invited thoughts, through various modes of media, promising the best 100 will find a place in the book.