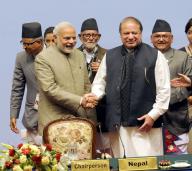 Kathmandu: In a final ice-breaking moment that gave a huge boost to Saarc and floundering regional cooperation, Indian Prime Minister Narendra Modi shook hands with his Pakistani counterpart Nawaz Sharif, laughed and even patted him on the arm at the closing ceremony of the bloc’s 18th summit here Thursday, to resounding applause from a relieved audience comprising leaders, diplomats and officials from the eight South Asian countries.

In a photo-op that appeared to belie the recent animosity between the two neighbours, Modi and Sharif kept their handshake for several seconds and chatted, smiling all the while, as Nepal Prime Minister Sushil Koirala, the host of the summit, looked on happily.

Modi and Sharif had shaken hands and interacted briefly during the retreat at Dhulikhel outside Kathmandu earlier in the day.

The two had otherwise studiously ignored each other during the summit Wednesday, the sixth anniversary of the 2008 Mumbai terror attacks that India has blamed on Pakistani elements.

“India is for peaceful and cooperative relations with Pakistan. If this shake hand leads to that we will welcome it. However, emphasis is on meaningful dialogue,” external affairs ministry spokesperson Syed Akbaruddin said later to reporters.

To a question, he said he was unaware of what Modi and Sharif spoke about during the Dhulikhel retreat as “there was no one else. Nobody else knows what they talked of. They spoke of Saarc matters, but what specifically they discussed, no one is privy”.

During the concluding ceremony, as soon as Koirala declared the session closed, Modi turned to the immediate neighbour to his right, Bhutan Prime Minister Tshering Tobgay, and shook hands and chatted.

He then shook hands with Maldives President Abdulla Yameen, and with Afghan President Ashraf Ghani, and was joined by Sri Lankan President Mahinda Rajapaksa.

Sharif was away from the group, talking to a Nepali minister, while Koirala was looking awkwardly on, standing in the midst of the two rival prime ministers.

Just when the question was on everyone’s mind – will they, won’t they – Modi finished chatting with his group of Saarc leaders, turned around and spoke to the Nepali prime minister, and stepped ahead to shake hands with Sharif.

Modi and Sharif smiled warmly at each other, and kept their hands clasped all the while as they chatted like old friends.

As the audience erupted into loud applause, Modi cracked what appeared like a joke, laughed and slapped Sharif gently on his arm – as the two kept their handshake on.

Both the leaders then turned towards the audience, comprising diplomats and senior officials of all the eight countries, as they continued to shake hands.

A relieved Koirala, who is credited with mediating between them, looked smilingly on.

The Himalayan Times was prompt in putting up the news on its website.

“The heads of governments of two historic rivals posed for photographs during the handshake for nearly a minute. The duo were seen talking to each other,” it said.

Earlier in the day, away from the glare of cameras, Modi and Sharif held informal talks at the Dhulikhel retreat, those present said.

The effect of the informal talks was immediately reflected in the proposed agreements.

The heads of state and government agreed to sign the Saarc Framework Agreement on Energy Cooperation on electricity trade, and decided to sign two other pacts — motor vehicle and railway agreements — within three months, a big face-saver for Summit host Nepal in particular and the region as a whole.

Dinesh Bhattarai, foreign relations advisor to Koriala, who was present in the retreat, confirmed to IANS that both the leaders held informal talks after meeting each other along with other heads of state and government.

Prime Minster Koirala pushed the two leaders to sit for talks, at least informally now, and break the logjam in the bilateral relations as other Saarc countries feel that the India-Pakistan dispute was impeding progress on greater South Asian cooperation and understanding.

During his talks with Modi, Koirala asked the Indian prime minister to reach out to Pakistan, given the former’s stature as Saarc leader, and its size, population and economy.

“While watching the Himalayas and taking herbal and organic food, Modi and Sharif were seen more open and close,” a diplomat said.

“The focus was on how to carry on the Saarc process and how to strengthening the bilateral ties.”

The Saarc leaders, including Modi, Sharif and Koriala, cracked jokes, planted trees and shared their personal matters with each other.

After the retreat, the leaders agreed to sign the Saarc Framework Agreement on Energy Cooperation which was announced in the Kathmandu Declaration in the evening.

Because of the deadlock between India and Pakistan, the three proposed agreements related to motor vehicle, railway and energy, all pushed by New Delhi, were uncertain until Thursday.

After the retreat and unofficial talks among the leaders, the Saarc leaders agreed to sign the energy deal and agreed to complete the other two agreements within three months, Bhattarai said.

The 33 food items served to the leaders were totally vegetarian, perhaps in deference to the diet preferences of the Indian prime minister who is a strict vegetarian. Gujarati basundi with jalebi was served to Modi as dessert.