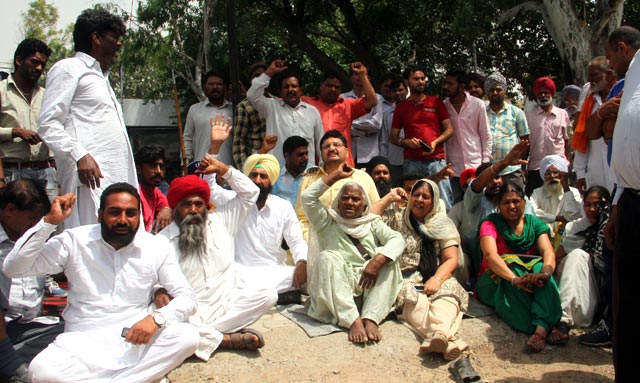 Chandigarh, May 1 (IANS) Silent for nearly two days after a teenaged girl was killed after being thrown out of a bus owned by him, Punjab Deputy Chief Minister Sukhbir Singh Badal on Friday finally admitted that the bus service was run by his company.

According to reports, the victim’s family was refusing to cremate her body till action was taken in the matter.

Expressing his “deepest sorrow and outrage” over the Moga bus tragedy, in which 13-year old Arshdeep was killed after being pushed out of the speeding vehicle by her molesters, Sukhbir said: “I am with the grieving family in their hour of extreme sorrow and want to assure them that those responsible for bringing this tragedy upon them would be given exemplary punishment under the law of the land.”

The victim’s mother, Shinder Kaur, 36, who was also pushed out of the bus, was admitted to a government hospital with serious injuries.

In a statement here, Sukhbir Badal, who also holds the home portfolio, said: “I am personally and deeply anguished over the incident, more so because of the bus in which it happened.”

Referring to his ownership of the company, he said: “The fact only adds to our responsibility. It is absurd to even think that the incident of such brutality and brazenness to go unpunished because of the company’s ownership.”

Sukhbir Badal and his wife and union minister Harsimrat Kaur Badal own the Orbit Aviation Company to which the bus belonged.

The opposition Congress had on Thursday demanded that a case be registered against Sukhbir Badal and his family members who were owners of the company.

Shinder Kaur said that they complained about the molestation to the bus driver but he mocked at them and started speeding the vehicle. She said that no one helped them inside the bus and alleged that she and her daughter were pushed out of the moving bus by the molesters.

The family of three, including a 14-year-old boy, had boarded the bus at Moga town for Baghapurana town, which is 20 km away, on Wednesday evening. The mother and daughter were soon targeted with indecent gestures and molestation.

Reacting to the incident, which has left the Punjab government, the ruling Akali Dal and the Badal family embarrassed, the Punjab government on Friday set up a high level committee headed by Chief Secretary Sarvesh Kaushal to suggest ways to ensure safety and security of commuters in public transport.

Sukhbir Badal, whose father, Chief Minister Parkash Singh Badal had on Thursday disowned any association with the the Orbit Aviation Company, on Friday blamed the opposition for playing politics over the death of the girl.

“I am deeply pained by the utterly irresponsible and inhuman statements emerging from some Congress leaders. Instead of helping in assuaging the wounded feelings of the affected family, the opposition leaders have been gleefully latching on to it as an opportunity to buy their lost political relevance in Punjab,” he said.

He said that he would allow police to complete its investigation into the matter independently. He said that he wanted to “change the perception in the country that those with political links usually get away with outrageous breach of law”.

Noting that the bus company was operating in Punjab since 1947, he said that the opposition charge that the Orbit company prospered during the Akali Dal rule was false as the party had been out of power for a number of years in between.