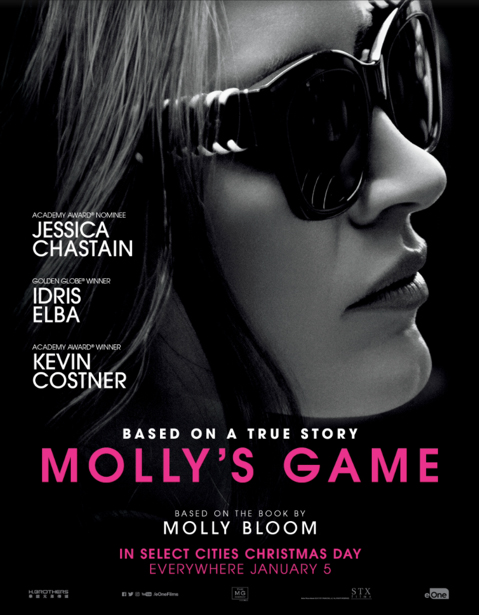 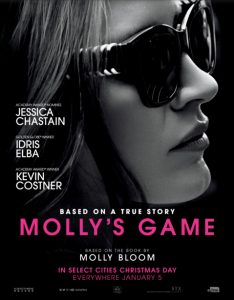 Slick indeed is Eone Entertainment’s flashy look into the world of high stakes gambling depicted effectively in Molly’s Game. Fresh fun it is to follow in this true tale of an up and up comer simply willing to eke out a living. Join the festivities at the International Village Cinemas Fifth Avenue Cinemas and other Cineplex theatres across base.

Tailor made for the lead figure in this elaborate business money making venture is Jessica Chastain. Hot off her impressive day of reckoning as a top-flight Washington lobbyist in Ms. Sloan this shapely lass now turns her formidable sights on the high stakes world of big league gaming. Cast as woman of the moment Molly Bloom this accomplished athlete first came to fame as a top level mogul skier gunning for gold at the Olympics. Led by a seemingly possessed die hard dad played to the max by steady as he goes Kevin Costner (The Untouchables) this woman seems destined for success.

Sports can be fickle and an accent cuts Mary’s athletic career short. Fret not readers as this smart as a whip lady uses her wits and skills to carve out a new career niche. While relocating to L.A. Ms. Bloom gets a few menial jobs before finding her knack as a poker party organizer. All sorts of men (and women) enter her life as this quick study learns the ins and outs of running a game and then soaring to unbelievable heights

Success can be problematic. As the profits pile up Mary’s life and secret world come to the attention of the authorities and as could be expected her life becomes a living hell. Helping to sort it all out is a legal beagle played with zest by Idris Elba. Well directed and with a riveting glamour driven gaming atmosphere Molly’s Game is an emotional roller coaster that also has a moral compass. While not taking sides the excesses of gambling have a funny way of surfacing in this harrowing tale of making something out of nothing. Bank on having a good time at this flick. Let it roll!

MOLLY’S GAME, an Entertainment One release.