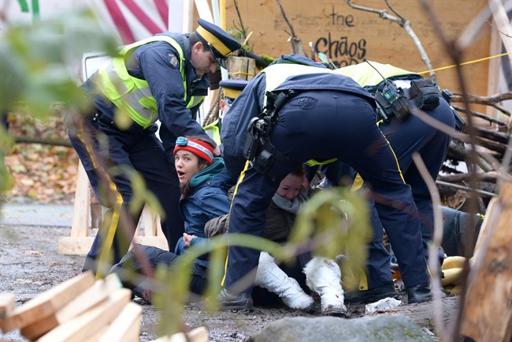 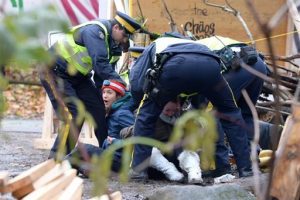 By James Keller, THE CANADIAN PRESS

BURNABY: Scuffles broke out as dozens of RCMP officers, shoulder to shoulder, formed a line to push protesters away from an area near Vancouver that a B.C. Supreme Court has ordered cleared.

An officer using a loudspeaker repeatedly ordered protesters to move about 100 metres up the road in a conservation area of Burnaby Mountain away from where Kinder Morgan survey crews would be working.

One middle-aged female who was in front of the moving line of officers was tossed to the ground behind police and was quickly arrested.

“Hey, that’s violence,” a protester yelled at police as the woman slammed on to the road. Other protesters yelled obscenities at officers.

What had been a peaceful protest, and a series of uneventful arrests early Thursday, became aggressive as officers ordered the crowd of over 100 chanting demonstrators to move back.

RCMP moved into the anti-pipeline encampment earlier in the day, arresting at least 14 people for violating the injunction ordering protesters to clear out so crews can do their work for the expansion of the Trans Mountain pipeline.

Police said many of those arrested were released on the condition that they no longer interfere, obstruct or impede survey crews.

RCMP Staff Sgt. Maj. John Buis said the remaining protesters were being processed at the scene and would also be released if they agreed to abide by the court order.

Police said they would leave the dismantling of the protesters camp to Kinder Morgan crews. Personal belongings will be catalogued and stored inside a security container and access to those items will be determined later, Buis said.

Activists started camping out on Burnaby Mountain in September after the company said it needed to do survey work related to the project, which has not yet received federal approval.

An injunction granted by a B.C. Supreme Court judge took effect Monday afternoon, but police had not made any move to enforce the order before Thursday’s arrests.

A crew with Kinder Morgan arrived several hours after the first arrests. Some of the workers had small video camera strapped to their bodies. They took measurements as protesters shouted at them to stop.

A ceremonial First Nations fire, remained burning at midday. A section of road was cordoned off by police tape and the area was surrounded by dozens of protesters, reporters and RCMP officers.

Antone said she had been assured by the RCMP that she would not be removed for the time being, adding she was prepared to be arrested.

Several other aboriginal women arrived later and also entered the tent encampment. Police officers joined them, sitting around the fire to talk, although it wasn’t clear what they said or whether they came to any agreement.

“We are in discussions with First Nations on how to respectfully remove a sacred fire and totem pole that remain inside the zone in contravention of the order,” Buis told reporters at the scene.

Burnaby Mountain has emerged as a battleground as Kinder Morgan’s preferred route for the expanded pipeline, which would triple capacity to transport Alberta crude to a terminal in Burnaby through a tunnel in the mountain.

The company says it needs to drill two bore holes on the mountain, which is home to a conservation area and Simon Fraser University, as it prepares for the federal approval process.

The City of Burnaby has also filed a lawsuit to prevent Kinder Morgan from cutting down trees and damaging parkland.

Adrangi said that whatever happens with the injunction, the pipeline’s opponents won’t be stopped.

“People have been organizing around this (pipeline) for even longer than this camp has been here, so to say that it’s just going to end in one day, I don’t believe it.”

“It is very disappointing to me that this had to happen today,” she said. “I can only assume that the RCMP is under tremendous pressure from Kinder Morgan. It doesn’t really make logical sense any other way.”

A spokesman for Kinder Morgan wouldn’t comment about Thursday’s arrests and referred any comment back to the RCMP.

Opponents of the pipeline have said the expansion would increase the risk of a devastating spill because of the increase in the amount of oil through the pipeline and the added tanker traffic in Vancouver’s harbour.

Protester Eric Doherty compared the battle to the historic Clayoquot Sound logging protests on Vancouver Island in the late 1980s.

“I would say that this has a potential to be much bigger,” he said.

“Clayoquot Sound was isolated, a long way from a major city, but it also didn’t have the huge climate justice movement behind it that this does.”

With files from Tamsyn Burgmann in Vancouver