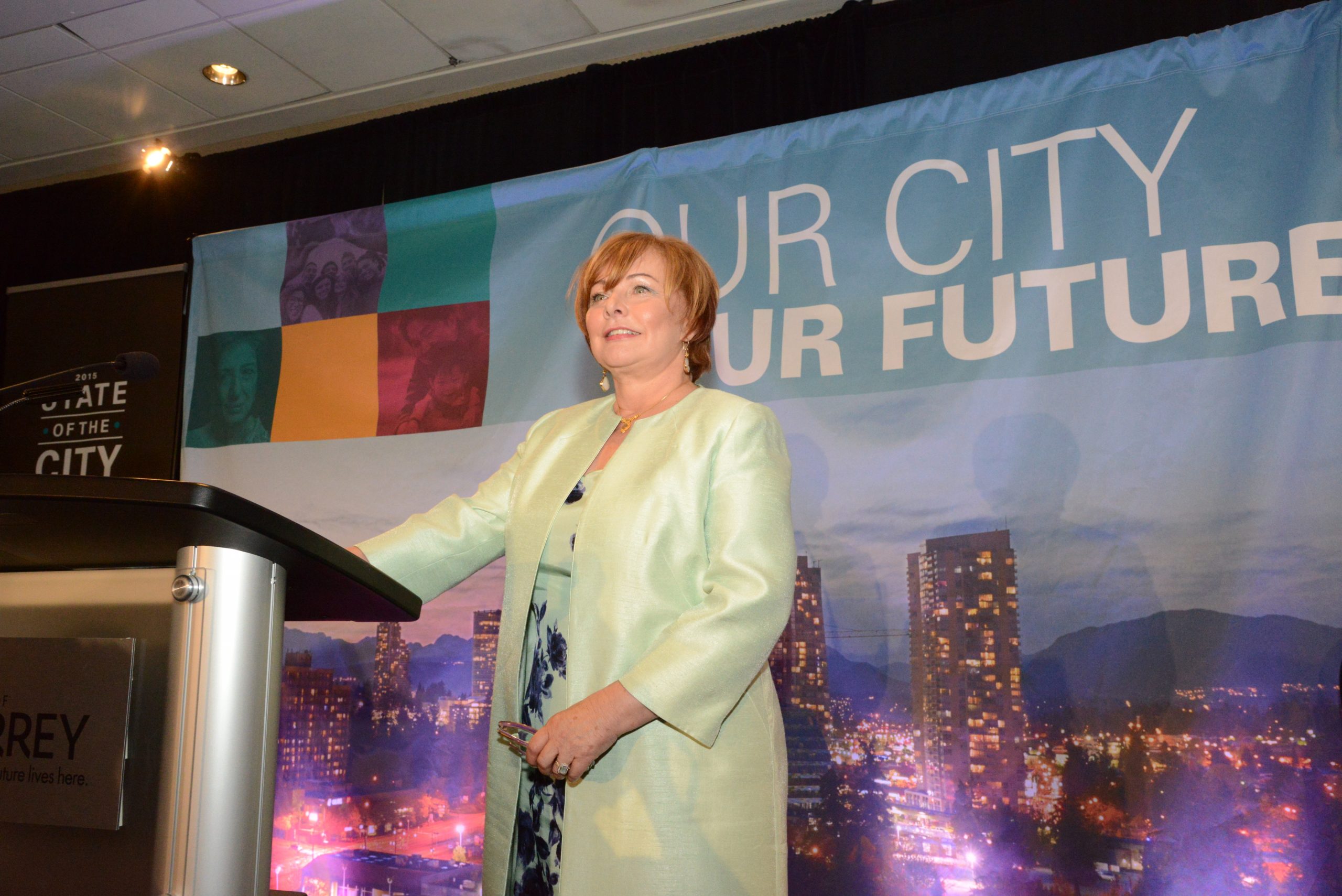 Mayor Hepner’s motto in State of the City address

Surrey: 168 days on the job, Surrey Mayor Hepner presented her first report card in the annual State of the City luncheon to over 450 people from the city’s business community, including former mayor Dianne Watts. She described growing city by a number of different indicators: 1,000 residents per month; speaking 102 different languages; we are young, one-third of the population is under 19; we are also aging, 100,000 seniors will live here by 2021; at 315 square kilometres bigger than Vancouver, Richmond, and Burnaby combined – we have room to grow; Surrey was just named one of Canada’s top employers for young people; just named in the top seven finalists for the 2015 Most Intelligent Community of the Year award; voted best place in BC to Invest four years running; committed to protecting 10,00 acres of natural space across Surrey (10 Stanley Parks); diverts 70% of organic wastes away from landfills; supports more than 120 arts, heritage and cultural groups.

Public Safety: Hepner said the primary issue is creating a community that is not just safer, but one that feels safer, reporting that her commitment to more police has been approved federally and will see 800 offices in Surrey within the year.

She reported progress on the neighbourhood policing model being implemented, and that the search for a Director of Public Safety Strategies is underway.

Still with public safety, she reported progress on the Justice Precinct encompassing the former city hall campus with the law courts and main RCMP detachment, bringing health and social services into the precinct to better handle the wider needs of people who would otherwise end up before the courts. Hepner reported the city had secured over $24 million from the province to better integrate services.

Transit: The mayor identified the crucial nature of the transit plebiscite, with nine days to go, and reminded all that 45% of the plan is for projects in Surrey. She said the Light Rail project alone would create 24,000 construction jobs.

Business and the health sector: An estimated 2,000 new businesses are expected to open in surrey this year, Innovation Boulevard was cited as one of the best examples of business success for the partnership involving the city, SFU and the Fraser Health Authority. Conquer Mobile’s Surgery Simulation Program moved from idea to product in less than one year demonstrating the value of the concept to commercialize ideas quickly. Hepner reported receiving $36 million from the federal Agewell Program, and $3.6 million in federal funds for SFU and the city, towards establishing the Imagetech Lab, the first in western Canada, at Surrey Memorial Hospital. It will be a world-class medical imaging centre, for advanced treatment of brain disorders and diseases.

Cleantech and agri-innovation: Next on the list of achievements was the success in recruiting to Newton, the Foresight Cleantech Accelerator Centre which last month received $2 million in federal funding to help clean up Canada’s resource industry.

Mayor Hepner announced bringing cleantech assets together including Powertech labs, SFU’s Fuel Cell Research Lab, and KPU with Foresight and other cleantech companies to establish the Newton Industrial area, dubbed “Econewton,” to be an international hub for cleantech innovation, demonstration and commercialization.

This same kind of approach will be employed to further develop Agi-innovation to address food security and to “maximize the utilization and productivity of agricultural land and help develop the farmers of the future.” One initiative blended between Social, Crime and Agricultural solutions is the Biopod Project, a recovery centre for youth to create a place where agri-technologies can be tested refined and demonstrated while acting as a skills training facility.

Cybersecurity: In the high tech crime field, Hepner reported the city is working with SFU and Ben Gurion Univeristy of Israel, and top companies to address the vulnerabilities of cities.

“Ultimately we would like to see the world’s cities to look to surrey and our cyber-security companies for solutions to global cyber threats,” said Hepner.

At the same time the city plans to increase its city-wide wi-fi access, from 18 locations to 45, completing Innovation Boulevard’s fibre network connection to Surrey city centre and Surrey Memorial Hospital.

Infrastructure Development: The North Surrey Rec Centre and Ice arena will relocate to King George and 128th and the city will seek expressions of interest to build a multi-purpose sport and entertainment complex and stadium in south Westminster as part of a revitalization of the area.  The Guildford Aquatic Centre is about to open and the Grandview pool will follow later this year. They city will build phase two of the Surrey Museum, add a new soccer Centre of Excellence, develop the East Clayton Rec Centre, build a new neighbourhood park in Grandview Heights, add more ice in Cloverdale and build a contemporary arts space and gallery in south Surrey. Mayor Hepner also reported plans for a cultural corridor from city centre along King George Boulevard creating a hub for cultural and arts facilities and a close quarter relationship with business.

Environment: Mayor Hepner reported that the completion of the city’s Bio-Fuel facility, in 2017, will make it the first closed loop system in North America by collecting the city’s organic waste and processing it into alternate fuels. This will fuel the trucks picking up the waste and ultimately the rest of the city fleet. CO2 removal savings are estimated to be equal to removing 8,500 cars from the road annually.

The city will step up its tree planting program from 2500 per year to 5,000 per year over the next four years.

City Hall: Referring back to technology, the mayor commented on the progress of the state of the art intelligent traffic monitoring system, as a tool to both facilitate the most efficient movement of traffic across the city and offer additional strength to public safety in Surrey. In the planning department, to facilitate shortening timelines for development and building permit approvals, the city will introduce a Nexus-style system to facilitate a process more effective and efficient for all parties.

Hepner’s first report to the business community was delivered with the confidence of a leader with a good news story. The audience responded with a standing ovation.