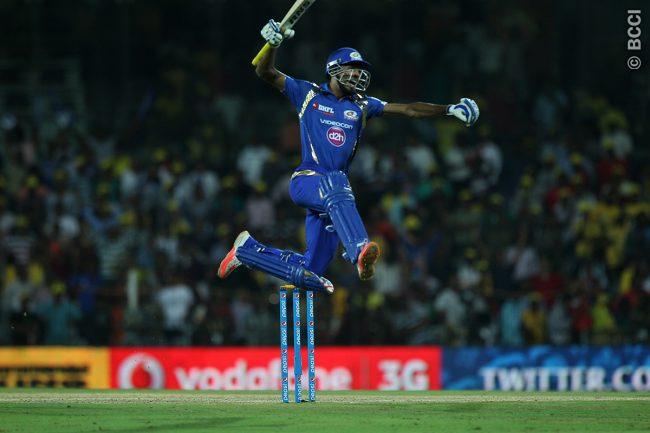 Chennai, May 8 (IANS) Mumbai Indians jumped to the fourth spot in the Indian Premier League (IPL) standings with a crucial six-wicket victory over hosts Chennai Super Kings (CSK) in a group league match at the M.A Chaidambaram Stadium here on Friday.

With the win, Mumbai climbed to the fourth spot with 12 points from 11 matches. CSK despite the loss stayed at the summit place with 14 points after 11 games. It was CSK’s first loss at their home ground in this year’s IPL.

Chasing 159 to win, Mumbai got a smooth start with opener Parthiv Patel (45) and Lendl Simmons (38) combining effectively to get them to a strong position.

It looked doomed for the home team as Mumbai were looked set to cruise to a comfortable victory with no CSK bowler managing to trouble the openers.

But just when it seemed all over for CSK, spinner Ravichandran Ashwin (2/17) struck twice in the 11th over to jolt the Mumbai march.

They made further inroads when the dangerous West Indian power hitter Kieron Pollard (1) was run out in the next over.

Mumbai then found it difficult to get going. Skipper Rohit Sharma (18) and Ambati Rayadu (34 not out) tried to build a partnership to keep Mumbai’s run-making process ticking.

But Rohit was dropped in the 16th over by du Plessis off the bowling of Bravo after getting fooled into making an expansive shot and getting beaten by a slower delivery.

The miss could have jeopardised CSK’s hopes of a victory. But the budding 39-run partnership was broken in the 18th over by Bravo when he again flummoxed Rohit into a false stroke to be caught in the deep by Suresh Raina.

Hardik Pandya (21) came to the crease and showing no signs of nerves struck three lusty sixes off left-arm spinner Pawan Negi’s 19th over to inch Mumbai closer to victory. The bowler went for 25 runs to extinguish CSK’s chance to win.

Earlier, league leaders Chennai Super Kings (CSK) posted a fighting total of 158 for five on a slow and low pitch.

CSK skipper Mahendra Singh Dhoni won the toss and elected to bat. They were on the offensive from the very start with opener Dwayne Smith (27) and Brendon McCullum (23) threatening to cut loose with aggressive shots.

But three quick wickets of McCullum, Suresh Raina (10) and Smith halted their progress

Faf du Plessis (17) and Dhoni (39 not out) resurrected their innings and gave them a necessary platform to accelerate in the slog overs in the sluggish pitch.

After du Plessis’ dismissal in the 16th over, Dhoni along with Pawan Negi (36) helped CSK post a fighting total.

Negi eclipsed Dhoni in power hitting, taking just 17 balls for his useful knock, studded with four boundaries and a six while Dhoni took 32 balls for his 39, hitting two fours and two sixes.

Leaders spar over climate, foreign policy in debate, but format leaves some unhappy

Trudeau says he did not want Wilson Raybould to lie as SNC Lavalin affair re...