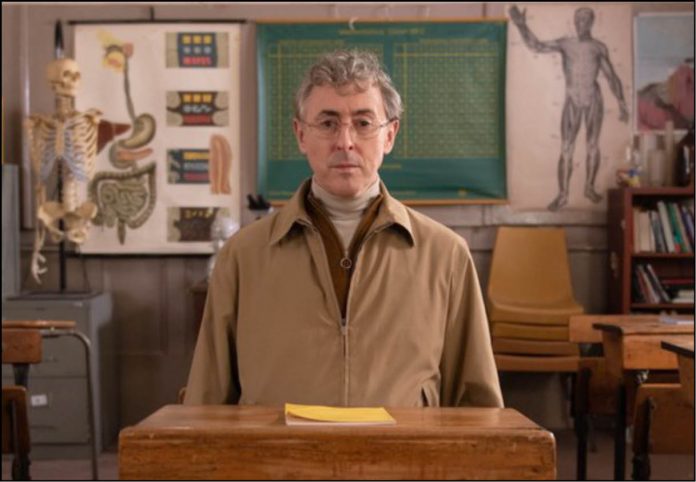 Seeing is believing. With a nod to Rodney Dangerfield prepare to be blown away with the true story of the ultimate con in My Old School. On screen at the Van City Theatre and other select Cineplex and Landmark theatres around B.C. this Mongrel Media effort is hilarious fun.
Set sail to Scotland to learn In the 1990s how over time a chap from the wrong side of the tracks managed to wiggle his way into a prestigious Scottish school in a ritzy suburb of Glasgow. Actor Alan Cumming (Goldeneye) tries to keep a straight face while smirking as he recounts his days as troubled student Brandon Lee at Bearsden Academy.
Awkward and nerdy Brandon has a tough time fitting in. With medical school on his mind we see a decade or so later how a disguised character relives those high school times under an assumed name. How the double identity ruse is exposed gives hilarious insight as to just how far a 30 something man would go to pose as a 17 year old with the same teachers in place – and get away with it.
Smart, folksy and full of charm My Old School proves how clever people can be and the cost to all when the plot unravels and the truth gets out. With pop cultural Princess Lulu (To Sir With Love) and actual students from Brandon’s high school days recounting those heady times My Old School is a snappy part animated part live people eye-opener.

Heat warnings for much of B.C. with temperatures up to 40 C through to Saturday

Turning the page on adult literacy with increased funding