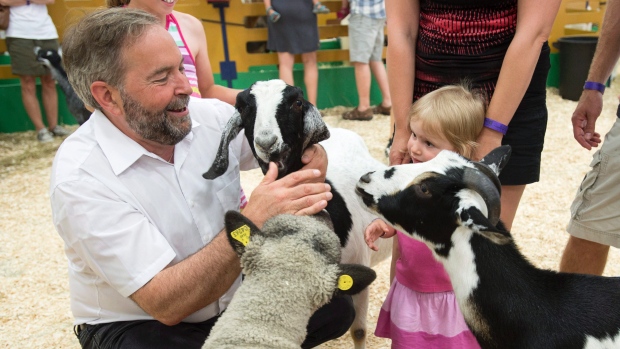 By Giuseppe Valiante, THE CANADIAN PRESS
SAINT-HYACINTHE, Quebec: The soil-rich farmland south of Montreal called the Monteregie is currently an NDP bastion with nearly all of the region’s ridings under the party banner, and Leader Tom Mulcair knows he needs to keep these seats to have a strong shot at becoming prime minister in the fall.
Mulcair toured a major agricultural fair in the Monteregie town of Saint-Hyacinthe, Que., on Wednesday, feeding goats and shaking hands a few days before Prime Minister Stephen Harper is expected to trigger an early election campaign.
Roland Bastien, 76, who sells cowboy hats at the fair, said she likes the NDP but is still not 100 per cent certain she’ll choose the party on election day.
“The NDP is younger, they have new ideas,” she said. “I think people over 40, they want to see change. The NDP is interesting.”
The region used to be a Bloc Quebecois stronghold but switched to the NDP in 2011, helping to propel the party to official Opposition status for the first time.
The NDP needs to maintain its support in the region in order to give it a strong shot at forming a government after the scheduled Oct. 19 election.
Claude Lemaire, 62, walking alone in the sweltering heat on the fairgrounds, said he likes the NDP, but he’s a Bloc Quebecois supporter and said he probably won’t change his mind _ unless he thinks the NDP could actually win the election.
Lemaire said he decided to vote Bloc after he learned Gilles Duceppe came back from political exile to lead the party once more.
“I think people around here switched to the NDP because of Jack Layton,” he said, referring to the late NDP leader who led the party to its 2011 surprising result.
“Mulcair has credibility for sure,” he added. “I would like to see the NDP win. I don’t think they will but I hope they do. If I think they’ll win then I’d consider voting for them.”
The Monteregie has roughly 1.5 million people and covers much of the territory south of Montreal down to the U.S. border.
The region is considered “Quebec’s pantry” due to it being the province’s top region for poultry, dairy, pork, vegetables and apples.
The land is the most arable in Quebec and its 7,070 agriculture companies produce 25 per cent of the province’s total agricultural yield with annual revenues of $3 billion.
That’s why the supply management system used to set prices, control costs and protect the farming industry from foreign competition is so important to the region, according to Saint-Hyacinthe Mayor Claude Corbeil.
“It’s extremely important the system doesn’t change,” he said.
Mulcair told reporters at the fair that an NDP government would “fight tooth and nail” to keep the current system in place, while reports suggest the government might be considering opening the system to foreign competition.
But while the election campaign is reportedly a few days away, most people approached at the fair Wednesday had summer festivities on their minds.
Luc Daigneault, 39, was walking with his family towards the games section of the fairgrounds and said he is still undecided about which party he’d vote for.
“I think I voted Liberal last time _ but I don’t even remember,” he said with a chuckle.
The NDP is on his radar, though.
He said he’d consider voting for the party “as long as they don’t make fake promises and say they’ll do things that we know will never happen.”
Mulcair will pay a visit to Edmunston, N.B., Thursday and hold a news conference with Yvon Godin, the MP for Acadie-Bathurst, and Rosaire L’Italien, the NDP candidate for Madawaska-Restigouche.