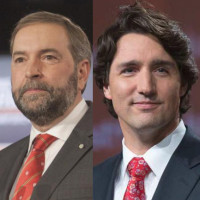 The Canadian Press
LAVAL, Quebec: Liberal Leader Justin Trudeau says the NDP needs to explain to Canadians why it thinks Quebec should have an easier path to sovereignty than the one decided by the Supreme Court.
Trudeau called out the NDP today during an event at a space centre north of Montreal.
He says the Liberal party agrees with the Supreme Court’s 1998 decision that a referendum result needs a clear majority for Quebec to secede from Canada.
The NDP says a majority of 50 per cent plus one would suffice.
Trudeau says the NDP’s position on Quebec sovereignty is unclear and it needs to better explain why it disagrees with the Supreme Court.