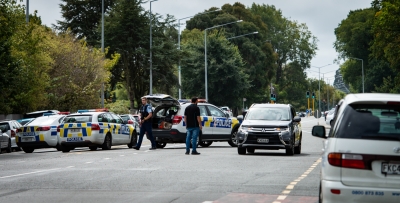 hristchurch: In the deadliest incident of violence in New Zealand in over seven decades, at least 49 people were killed and and 48 others, including an Indian, injured when at least two gunmen, said to be right-wing extremists, opened indiscriminate fire during Friday prayers at two mosques in Christchurch city. Nine Indian nationals or persons of Indian origin were among the missing.

The Bangladesh cricket team touring New Zealand had a narrow escape as the entire team had gone to one of the mosques near Hagley Park for Friday prayers.

Bangladesh Cricket Board spokesman Jalal Yunus said the team was about to go inside when the killings began. The New Zealand-Bangladesh third Test match set to be played in Christchurch was axed.

The attacks evoked condemnation from across the world and a call to counter Islamophobia and hate crimes. It was the first attack on a mosque in the “Western World” since the attack in Canada’s Quebec in January 2017 in which six worshippers were killed and 19 others injured.

One person died in hospital, The New Zealand Herald reported.

This was the most fatal incident in New Zealand since the 1943 riot at a prisoner of war camp left 48 Japanese captives and one New Zealander dead. The last incident of terror in New Zealand was an attempted hijacking by a Somali women in 2010 that was foiled by the pilots, while the last incident leading to loss of life was the 1985 bombing of Greenpeace ship Rainbow Warrior by French secret agents that left an activist dead.

Ahmed Jehangir, a man from Hyderabad, was among those shot at in the horrific massacre. He was injured and taken to hospital, his brother Khursheed Iqbal Jehangir said.

Another man from Hyderabad was also reported missing. Farhaj Ahsan had gone to the same mosque for prayers and was listed missing after the attack. His family is worried over Farhaj’s well-being.

Witnesses said there were around 400 people in the Al Noor Mosque at the time of the attack and they ran for their lives after hearing gunshots. Around 100 were there in Linwood Avenue Mosque.

A man in his late 20s was charged with murder and will appear in court on Saturday morning, the police said. Two other men and one woman were detained and firearms and explosive devices were recovered.

Bush said one of those detained was later released, while officers were working to determine if the other two were involved.

The police did not name any of the suspects, but a man identifying himself as Brenton Tarrant, a 28-year-old born in Australia, livestreamed a 17-minute footage on Facebook showing him driving to a mosque, entering and shooting randomly at people inside.

He also posted a manifesto online before the attacks, in which he espoused far-right and anti-immigrant ideology.

The New Zealand Premier condemned the ideology of the killers, saying: “You may have chosen us but we utterly reject and condemn you.” None of the suspects was on terrorism watchlists.

Hassan, 29, a Sri Lankan Muslim who has lived in New Zealand for six months, said he came to the country for its “peace, and because there are no wars”.

“I don’t know who of my friends is dead or alive now. I am waiting. The police told me: ‘I am sorry, this is the first time this has ever happened in this country.'”

BBC quoted other witnesses as saying that they ran for their lives and saw people bleeding on the ground outside the Al Noor Mosque. The gunman targeted the men’s prayer room in the mosque and then moved to the women’s room.

The government advised people not to go to mosques until further notice. All schools were shut down.

One man, Robert Weatherhead, told Newstalk that he took in people who escaped from the Al Noor mosque. He described the gunman as “white, aged in his 30s or 40s and wearing a uniform”.

Organization of Islamic Cooperation Secretary General Yousef bin Ahmad Al-Othaimeen said: “The brutal crime had shocked and hurt the feelings of all Muslims around the world and served as a further warning on the obvious dangers of hate, intolerance, and Islamophobia.”

Security was scaled up at mosques in Europe and America.