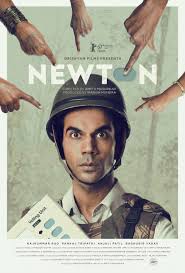 The winners’ names were being updated on the event’s Twitter handle, which also gave a glimpse into Rajkummar’s acceptance speech.

Congratulations came in for the team.

“Congratulations my darling Rajkummar Rao and amazing talents Mayank Tewari, Amit Masurkar. A win at the APSA is a huge achievement and should make India super proud,” tweeted Hansal Mehta, who has worked with Rajkummar multiple times.

“Newton” is India’s official entry for the foreign language film category at the Academy Awards 2018. Produced by Drishyam Films and directed by Masurkar, the movie revolves around a young government clerk who is sent on election duty to a Maoist-controlled town and how the ideological struggle puts him in an awkward situation.

As for “Lady of the Lake”, directed by Haobam Paban Kumar, the APSA awarded it “a special mention for the Cultural Diversity Award under the patronage of Unesco”.

The award represents the shared common goals of APSA and Unesco, to promote diversity of cultural expression and raise awareness of the value of culture at local, national and international levels.

Shehnad Jalal stood a chance in APSA’s achievement in the cinematography category for “Lady of the Lake”, but lost it to a Russian movie.

Indian director Sanal Kumar Sasidharan was nominated in the achievement in directing category for his Malayalam movie “S Durga”, which is in the news for being excluded from the Indian Panorama section of the ongoing 48th International Film Festival in Goa.