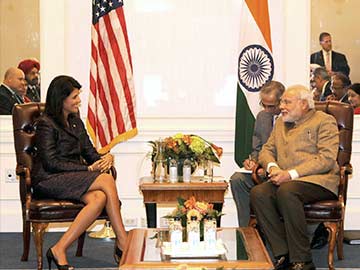 Haley will arrive Chandigarh on Nov 13.

Haley, whose father’s family used to live in nearly Verka suburb till the early 1960s before migrating to the United States, will offer prayers at the holiest of Sikh shrines, Harmandar Sahib, popularly known as Golden Temple on Saturday (Nov 15).

The Indian-origin leader was re-elected governor of South Carolina recently.

This will be Haley’s first visit to her family’s home state in nearly four decades. Born in 1972, Nikki had last visited Amritsar as a two-year old. Her father Ajit Singh Randhawa used to live in Verka.

She is on a 10-day trip to India where she will be visiting New Delhi, Mumbai, Chandigarh and Amritsar to seek investment for her state.

“She will be visiting the Golden Temple and Jallianwala Bagh on Nov 15. She will also visit the Guru Nanak Dev University and meet students there. She will be meeting her relatives also,” said an Amritsar district administration official.

Relatives of Haley, who was Nimrata Randhawa before her marriage, had celebrated in Verka when she became South Carolina governor for the first time in November 2010.

She became the first Indian-American woman to become governor of a state in the US.

Another Indian American, Bobby Jindal, has been governor of Louisiana state in the US. His relatives live in Malerkotla and Ludhiana in Punjab.