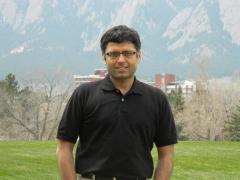 New York, Jan 19 (IANS) A novel light-activated nanotherapy developed by researchers at the University of Colorado- Boulder may be an effective weapon against the drug-resistant bacteria, say researchers including one of Indian-origin.

Efforts to thwart the so-called “superbugs” – antibiotic-resistant bacteria such as Salmonella, E. Coli and Staphylococcus — have consistently fallen short due to the bacteria’s ability to rapidly adapt and develop immunity to common antibiotics such as penicillin.

The dots, which are about 20,000 times smaller than a human hair and resemble the tiny semiconductors used in consumer electronics, successfully killed 92 percent of drug-resistant bacterial cells in a lab-grown culture.

“By shrinking these semiconductors down to the nanoscale, we’re able to create highly specific interactions within the cellular environment that only target the infection,” said senior author of the study Prashant Nagpal, aassistant professor at University of Colorado Boulder in the US.

Previous research has shown that metal nanoparticles – created from gold and silver, among other metals – can be effective at combating antibiotic resistant infections, but can indiscriminately damage surrounding cells as well.

The quantum dots, however, can be tailored to particular infections thanks to their light-activated properties.

The dots remain inactive in darkness, but can be activated on command by exposing them to light, allowing researchers to modify the wavelength in order to alter and kill the infected cells.

“While we can always count on these superbugs to adapt and fight the therapy, we can quickly tailor these quantum dots to come up with a new therapy and therefore fight back faster in this evolutionary race,” Nagpal explained.