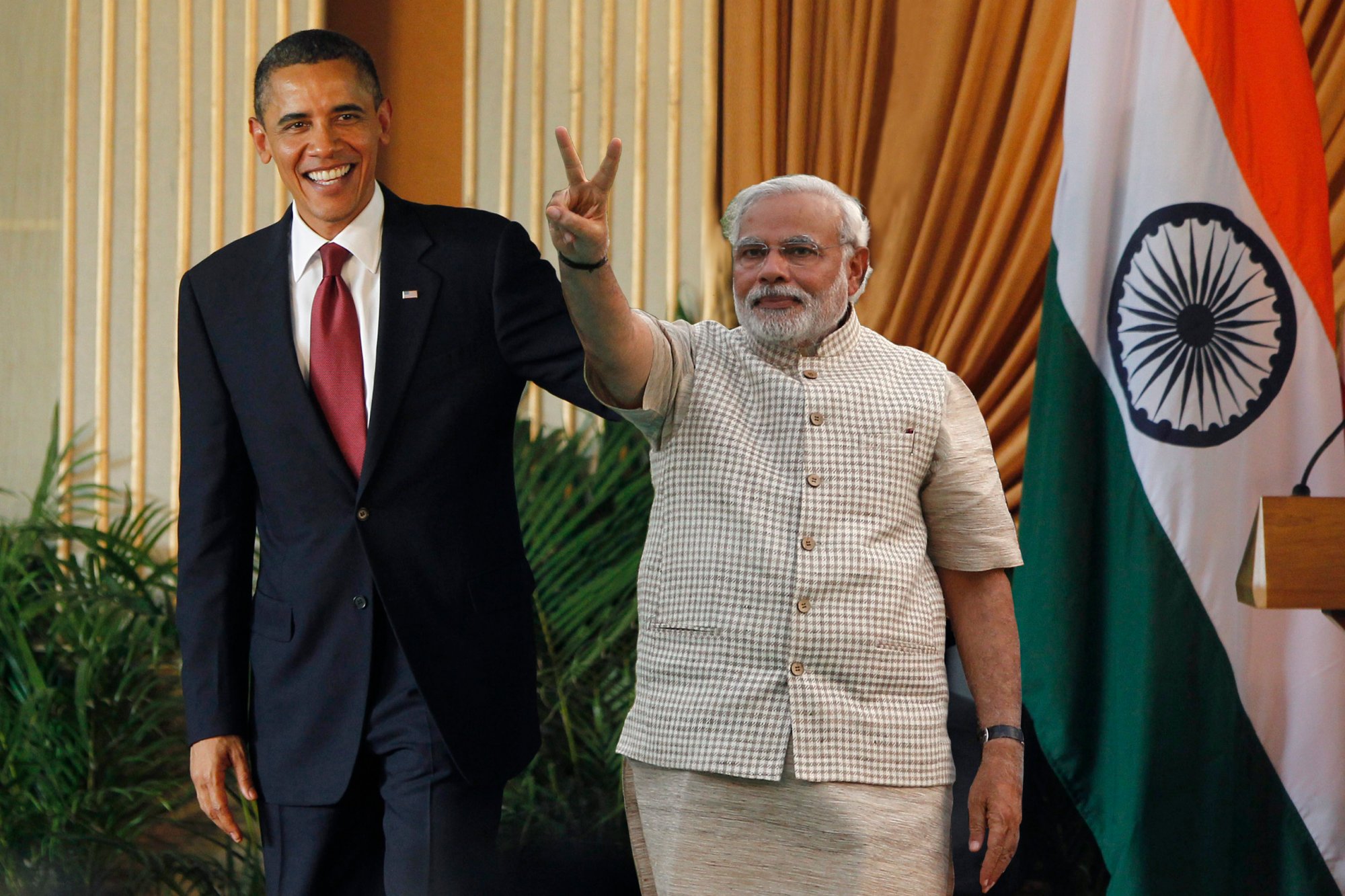 New Delhi/Washington, Jan 22 (IANS) Barack Obama accompanied by his wife Michelle Obama will touch down in the Indian capital on the morning of Jan 25 on a three-day state visit that, besides the symbolism of being the first time a US president would be chief guest at the Republic Day parade, is expected to see “substantive outcomes” from talks in the fields of defence, energy, climate change and trade.
Obama, who is arriving on the invitation of Prime Minister Narendra Modi, who he has called a “man of action”, would arrive on Air Force One at 10 a.m. to a flurry of activities, which would culminate in a visit to Agra to see the Taj Mahal.
Obama is the first US president to visit India twice during his tenure and the first to attend the Republic Day parade as chief guest.
Modi and Obama would interact on at least seven different occasions during the three-day visit.
The two are also to record a joint ‘Mann ki Baat’ to be broadcast on All India Radio Jan 27, in a different take from the joint article they had penned in the Washington Post during Modi’s visit to the US in September 2014.
External affairs ministry spokesperson Syed Akbaruddin said Obama’s visit was a “culmination of a qualitative reinvigoration of our ties following the meeting” between the two leaders in September last year.
He said since that meeting, both sides have “acted with alacrity to collaborate in common pursuits and traversed a transformative path”.
There was no clarification on whether Modi would go to the airport to receive the Obamas.
To a question if the prime minister would go to the airport, the spokesperson said that as per protocol, the minister-in-waiting and senior ministry officials would be going.
Union Power Minister Piyush Goyal has been named minister-in-waiting for the visit and would receive Obama at the airport as well as escort and assist him through the visit.
Lawmakers on the trip include Democratic minority house leader Nancy Pelosi, Ami Bera, co-chair of the Congressional Caucus on India and India Americans, Joe Crowley, vice chair of the Democratic Caucus, and Senator Mark Warner, co-chair of the bipartisan Senate India Caucus.
Officials joining Obama on the trip include Commerce Secretary Penny Pritzker, US Trade Representative Michael Froman, and the president’s National Security Advisor Susan E. Rice and Counsellor to the President, John Podesta.
Topics of discussion will include business climate, trade and investment, climate change and energy, defence and security cooperation, regional global issues, Afghanistan and terrorism.
After his arrival, Obama would be accorded a ceremonial reception in the forecourt of Rashtrapati Bhavan.
He would then go to Raj Ghat to pay homage at the memorial of Mahatma Gandhi.
Obama would later head to Hyderabad House for bilateral discussions, which would be held in a restricted format.
After the talks, Modi will be hosting a luncheon for Obama and his delegation, during which delegation-level talks would be held, the spokesperson said.
In the evening of Jan 25, Obama would meet President Pranab Mukherjee, who is to host a banquet in his honour.
On Jan 26, Obama would attend the Republic Day parade at Rajpath as the chief guest – during which India’s military might and cultural diversity is showcased in a two-hour open air event.
In the evening, he would attend the At Home reception on the expansive lawns of Rashtrapati Bhavan hosted by the president.
Obama and Modi would also address business events Jan 26 evening.
Both Modi and Obama are to address the US-India Business Council (USIBC) comprising businesspersons from both countries that evening.
On the last day of the visit Jan 27, Obama would address a select audience at the Siri Fort auditorium on “India and America: The future we can build together”.
The Obamas will then proceed to Agra to see the Taj Mahal, before flying back to the US.
Asked about the expected outcome from the talks, the spokesperson said: “We expect substantive outcome from the talks.”
A nuclear contact group from both sides in engaged in hectic negotiations in London to iron out contentious issues over India’s nuclear liability law ahead of Obama’s visit.
The government said there has been “progress” in the talks but declined to say whether the Modi-Obama meeting would see any breakthrough announcement on implementation of the stalled civil nuclear deal.
The nuclear deal is mainly stuck over India’s stringent civil nuclear liability law that puts the onus on suppliers for any accident.
The two leaders had first met during Modi’s visit to the US in September, where both sides held summit level talks in Washington.
They met again in Myanmar during the East Asia Summit and in Brisbane during the G20 in November.
Both leaders have developed a perceived degree of warmth in ties, which are necessary to push forward the strategic ties.
At the President’s ceremonial banquet Jan 25, among those invited are the Ambani brothers Mukesh and Anil, Amitabh Bachchan, Sania Mirza, Sachin Tendulkar and the three service chiefs.