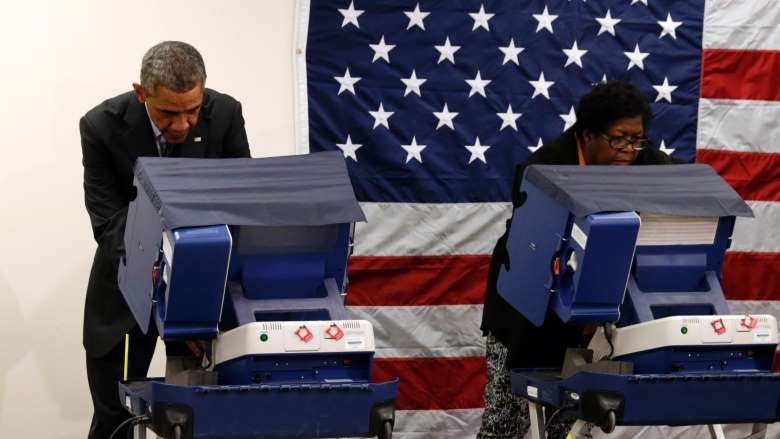 The fate of the Senate where Obama’s Democratic Party has a 53-45 majority with two Independents in the mix, hung in the balance as voters headed to the polls as early as 6 a.m. (4.30 p.m. IST) in New Jersey, New York and six other states on the East Coast.

The answer as to how many of the 36 Senate seats up for grabs in this election would go Republicans way would start coming in as the final polls close in the Aleutian Islands in the Pacific 19 hours later.

Even then, the final answer may not be clear “as a potential runoff in Louisiana and the counting of votes in other states could leave the outcome in doubt for weeks longer,” the Washington Post said.

All the 435 seats are up for election in the House where the Republicans who currently have 233-199 lead.

They are expected to widen the gap in what at an estimated $4 billion is said to be the most expensive mid-term election.

There are 36 gubernatorial races too as well, but the results may be too close to call in Colorado, New Hampshire, Georgia and Florida, according to the New York Times.

“Math is forbidding for Democrats in struggle for Senate,” wrote the influential Washington Post suggesting, “On the last day of the 2014 campaign, Democrats knew they were in trouble”.

But Vice President Joe Biden insisted all was not lost.

“I don’t agree with the oddsmakers,” he told CNN. “I predict we’re gonna … keep the Senate.”

The news channel acknowledged that “though Republicans appear on track to take the Senate majority for the first time in nearly a decade, polls can be wrong”.

A record 30 Indian-Americans are contesting Tuesday’s US elections with four of them seeking a two-year term in the House, two running for governorships, three more for other top state jobs and 20 eyeing legislative seats in 15 states.

Prominent among Desi contestants to the House are Democrat Amerish ‘Ami’ Bera, only the third Indian-American lawmaker in US history, and a former Obama administration official Rohit ‘Ro’ Khanna, who is giving a run for his money to veteran fellow Democrat Mike Honda in Silicon Valley.