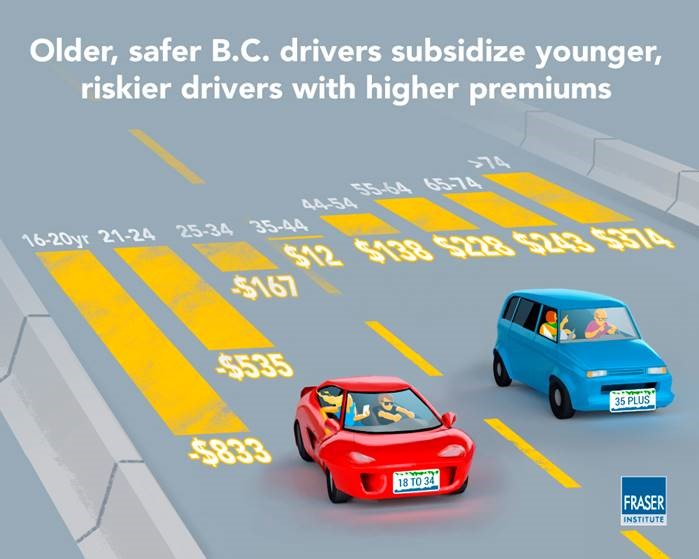 In August, the B.C. government announced changes to lower insurance costs for good drivers by up to $100 and raise costs for drivers with poor records.

“The government’s recent changes are welcome, but they don’t go far enough to fix our fundamentally flawed system that punishes safer drivers with higher rates to subsidize riskier drivers,” said John Chant, Fraser Institute senior fellow, professor emeritus of economics at Simon Fraser University and author of Understanding Why Basic Auto Insurance Rates in BC Are So High.

The study finds that because ICBC—the only provider of mandatory basic insurance coverage in the province—sets rates without regard for age or gender, young drivers (between the ages of 16 and 24) pay more than $800 less than they would if rates reflected estimated accident experience. In fact, all drivers under the age of 35 pay less than they otherwise would as a result.

Conversely, drivers over the age of 35—particularly drivers between 45 and 64—pay hundreds more in higher premiums than if rates reflected estimated accident experience. In fact, drivers between 55 and 64 pay $228 more per year due to ICBC’s rate structure.

And it’s not just the rate structure that leads to high insurance costs. ICBC also administers non-insurance related activities including driver testing, driver and vehicle licensing and fine collection, which are paid for by insurance premiums and add an estimated $50 to every driver’s insurance policy per year.

“It’s important that B.C. drivers understand why basic auto insurance is so expensive in this province as reforms are proposed and introduced.”