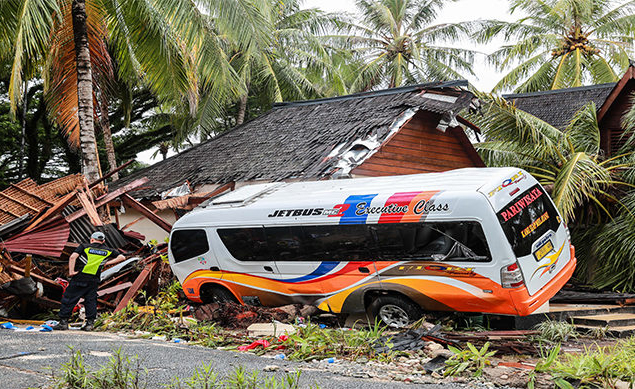 Jakarta: A massive evacuation was ordered from the coast along Indonesia’s western Sunda Strait on Friday after the warning of a possible second tsunami triggered by the eruption of the Anak Krakatau volcano that claimed over 400 lives last week.

Indonesia’s National Board for Disaster Management (BNPB) on Friday put the total number of evacuees from danger zones at 40,386 people in the provinces of Banten and Lampung, from some 20,000 the previous day.

A joint task force has been conducting the search and rescue for the victims trapped under the debris after the tsunami struck the Indonesian islands of Java and Sumatra without warning late Saturday, shortly after the Anak Krakatau volcano erupted in the Sunda Strait dividing the islands.

Meanwhile, the number of those injured in the tsunami jumped from over 1,400 people to 7,202 people, BNPB spokesperson Sutopo Purwo Nugroho was cited as saying by Xinhua news agency.

Indonesian volcanologists and disaster authorities advised locals and tourists not to indulge in activities within a radius of 1 km from the coast along the strait between the Java and Sumatra islands for fear of a fresh tsunami.

During last week’s tsunami, tidal waves up to 5 metres high destroyed at least 1,296 houses, 78 hotels and villas, 434 ships and other infrastructure, with the worst-hit area in Pandeglang district of Banten province.

So far, 430 people have been confirmed dead in the tsunami.

Volcanologists raised the alert on the Anak Krakatau volcano to the second highest level and extended the no-go zone to 5 km from the crater from the previous 2 km after its eruption triggered Saturday’s tsunami.

Indonesian President Joko Widodo promised to purchase devices for the crucial early warning system to warn of danger from the volcano, which is surrounded by tourist resorts, the country’s strategic industrial zone, a busy shipping lane and residential areas.

Meanwhile, an earthquake measuring 6.1 on the Richter scale rocked Indonesia’s Papua Barat province on Friday. There was, however, no report of any casualty.